It's Saturday afternoon, August 17, 2013, 12:07, and I've updated this Web page with a photograph and a short bit about how Pickles of the North spent her Friday night. More to come. The original top of this page follows the arrow. ⇒ We plan to get to the below topics and more on this radio program. The Pope appears to no longer be so worried about the Vatican's “gay lobby,” and the discovery of the origins of gold will probably not affect its current valuation. Speaking of gold, we'll be pitching on this program, so we hope that some of you will pledge. And another WBAI Staff person has passed away. I'll try to update this Web page at some point.

The next regular WBAI LSB meeting is scheduled to happen on Wednesday, August 14, 2013, at 7:00 PM at Alwan-for-the-arts, 16 Beaver Street, 4th floor, in downtown Manhattan.

The LSB had a report from the General Manager on the state of some things, and then LSB went into executive session for a while. The official report out of that executive session is that, “The WBAI LSB met in executive session to discuss personnel, financial and operational issues in relation to the PNB mandate.”

As we were preparing for this radio program we received word that Ritchie Arakelian, who worked as WBAI's mail clerk and more, has passed away from a sudden heart attack.

Ritchie was quite the character around WBAI. He will be missed.

It's mid-Summer and that means it's time for the WBAI Summer 'thon! We are pitching on this radio program! If you can please call 1-516-620-3602 during the radio program and pledge some amount of money to help keep Back of the Book on WBAI and help keep WBAI on the air.

So Pope Francis has seemed to soften the Vatican's stance on gay priests. While speaking to reporters on the plan ride back from his trip to Brazil this past week he said, “If someone is gay and he searches for the Lord and has good will, who am I to judge?” And while he didn't break with previously announced Roman Catholic Church anti-gay doctrine he at least didn't condemn gay people as, “An intrinsic moral evil,” which is what his predecessor did. He joked about the “gay lobby” which he'd reportedly been so concerned about a couple of weeks ago. He did, however, say that, “The problem is not having this orientation, the problem is having a lobby.” He also added, “Lobbies are not good.”

Maybe the Church will come out against allowing lobbyists to marry. 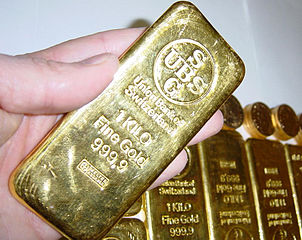 Transmutation Can Be Tough!

Got any gold? If so, you may have the end result of two colliding neutron stars from long ago. 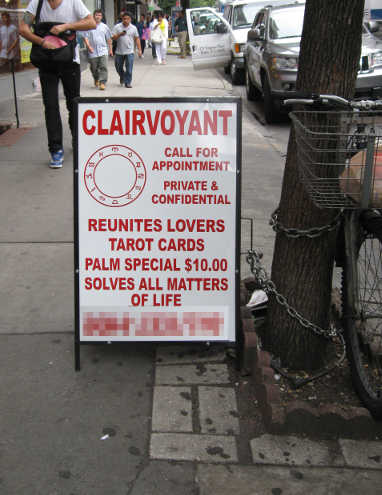 So this is a sign that Pickles of the North and I saw on our way between two subway stations on the upper east Side of Manhattan this past fortnight.

The dictionary defines a clairvoyant as, “A person claiming to have the power to foretell future events.” So why do people need to call for an appointment? Can't this clairvoyant tell when someone's going to show up for a reading or occult foot bath or whatever they're offering?

And whoever's doing this is making enough money to maintain themselves at an upper east side location! I suppose that this is just more proof that there are an awful lot of suckers in the world. 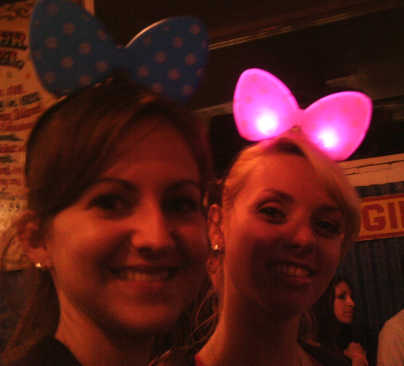 Jennifer and Steph at Coney Island

Since Pickles of the North and I got married some years ago I actually have more relatives than I used to. Here we see a photograph of Jennifer, our niece, and her friend Steph, who were both in the Big Apple for a short vacation. They had a long weekend to spend here, thanks to something called only Civic Holiday that affects the province where they work.

So they got to discover that Greater New York is rather larger than Manhattan, and that the free car service their hotel provided wouldn't drive them into Brooklyn. They then got a bit familiarized with the F Train and eventually met Pickles of the North in Coney Island. A fun time was had by all.

In the photograph we see Jennifer and Steph in the area under the Wonderwheel wearing their Mini-Mouse light-up bows, only one of which is lighting up. Pickles came home with one of these things too.

This Civic Holiday long weekend coincided with our radio program, so I had to stay home preparing this program on Friday night while Pickles got to go to Coney Island and hang out. Damn! I wish I could have gotten a pair of those Mini Mouse light up bows. Maybe if I'm real nice Pickles will let me wear hers.

My voice mail number at WBAI is disconnected. So you can no longer leave a message. If this situation changes I'll let everyone know.