It's Friday night, September 13, 2013, 21:46, and I've updated this Web page with the part about the welcoming message we saw as we got to the studios. The original top of this page follows the arrow. ⇒ Well, this is a radio program where we'll sort of celebrate the ending of the Middle Third of 2013. It will not be a gleeful celebration because I really like the Middle Third and would much prefer that it last a whole lot longer. Everything ends though. We plan to cover the below stuff and more on this program. One of these days I should get around to updating this Web page and I've got some other Web pages ready to be updated too. Check back, maybe things will get updated for your next visit.

The next regular WBAI LSB meeting is scheduled to happen on Wednesday, September 11, 2013, at 7:00 PM at Alwan-for-the-arts, 16 Beaver Street, 4th floor, in downtown Manhattan.

The LSB mostly heard reports from the General Manager and interim Program Director on the state of some things, and then LSB went into executive session for a while. The faction tried to shove one of their long motions that the rest of us didn't get to look at before it was put on the floor. This time they were stopped. It's a trick they use all the time, giving people mere minutes to try and digest some multi-page motion that they've worked on for weeks. The official report out of that executive session is that, “The WBAI LSB met in executive session to discuss personnel issues.”

WBAI is archiving the programs! Just go here and you'll be able to listen to this program any time for the next couple of months. You may need to scroll up one line to see the audio archive. Let me know if you find this feature useful. There is also another version of the archive here. UPDATE for this program only: The audio stream crashed 48 minutes into this program. The archive got fragmented by this. Also, the official archive of the second hour is in a more limited format on the WBAI Web site. I'll be looking to post a full archive here as a substitute.

With this program we bid adieu to the Middle Third of 2013. Yeah, it's my favorite time of the year because it's, mostly, sunny and warm. But every season must end.

We still have some of the actual Summer season left, but the Summer in terms of weather is really between Memorial Day and Labor Day here in Greater New York. And this is the start of Labor Day weekend. You can see more about the seasons and sub-seasons on my Web page about all of that. 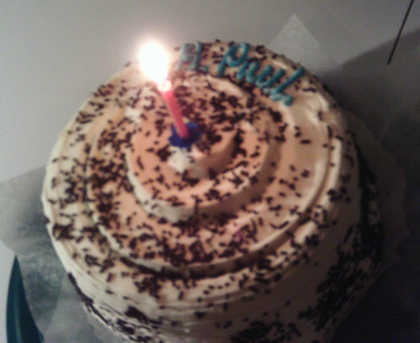 Oh, I shouldn't Eat Any of This

The observant will be able to conclude that an event has happened recently which traditionally brings out a cake with one's name and a candle on it. And, yes, this has happened for me quite recently.

We have had to forego the tradition of one candle for every year of life, owing to fire regulations in the City of New York.

I am once again amazed that I am an old man now.

In another “Communism Sucks!” segment we plan to talk about Kim Jong Un's ex-girlfriend being executed this past fortnight. Wow, that's probably triggering a whole lot of fantasies among lots of folks. 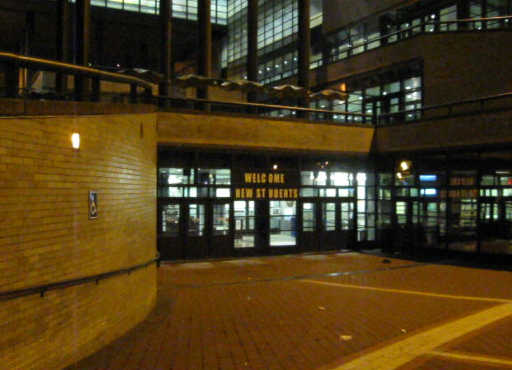 CCNY's welcome to the New Students — and Us!

So here's what we saw when we got to WBAI's current, temporary studios at CCNY for this program. Oh, the poor kids.

I remember my first day at college. They did not have any signs like this one up then.

I hope that all of the kids starting out at, or returning to, CCNY do not have any problems in class with their crayons and construction paper projects.

Yeah, I know the photograph is a little blurry. It's a combination of a cheap camera that has troubles focusing, low light conditions and us being in a rush to get into the studios in the wee hours.