It's Monday afternoon, October 7, 2013, 12:26, and I've updated this page by making another page where you can get the full archive of this three hour radio program. More updates to come. The original top of this page follows the arrow. ⇒ Oh, we're doing a three our spectacular tonight! Yes, Simon Loekle, who does As I Please, is off visiting old pals in eastern Europe. So we're filling in for Simon. Well, this is a pretty thin Web page for a three hour program. I'll try to fill it out more with whatever we do, after the program.

The next regular WBAI LSB meeting is scheduled to happen on Wednesday, October 9, 2013, at 7:00 PM at Alwan-for-the-arts, 16 Beaver Street, 4th floor, in downtown Manhattan.

One of the chronically disrupting faction operatives got censured at this meeting, at last. And I made the motion to censure him.

WBAI is archiving the programs! Just go here and you'll be able to listen to this program any time for the next couple of months. You may need to scroll up one line to see the audio archive. Let me know if you find this feature useful. There is also another version of the archive here. UPDATE for this program only: This was a special, three hour program. In order to listen to the entire program you'll need to also listen to the next two hours on the archive. The official archive of the second and third hours is in a more limited format on the WBAI Web site. I have posted a full archive of all three hours of this program here.

Maybe this will be our Gilligan's Island tour, it will be a three hour radio program. We'll see what we can do, and hope that we don't turn off too many of Simon Loekle's listeners.

Simon is visiting friends in eastern Europe for a few weeks, and we're sitting in for him on this program. 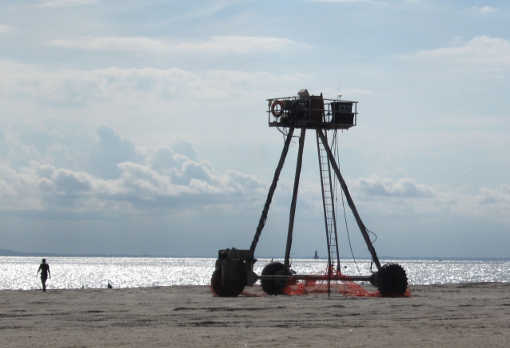 Below is the audio of the sounds that the pipe was making.


So we went to Coney Island this past week and, among other things, we saw this apparition on the beach. Egad! Was it a Martian War Machine, something from H. G. Wells' War of the Worlds? Or maybe it was Superman's tricycle.

Well, as it turns out the Army Corps of Engineers is getting around to trying to restore the beach at Coney island, which was devastated by superstorm Sandy, which left the beach a lot less sandy than it had been.

This Martian War Machine is actually a vehicle that deals with the dredging stuff.

We have a number of photographs of this operation, what we could see of it, and we even have the sound of the dredging pipes, which we'll play on the air. I'll post a video of a part of the operation after the program.