We're told it's going to be only 5° F. as we trudge up that hill to the CCNY studios of WBAI this morning. Let's hope we make it okay. We plan to get to a number of things on this program, and we also want to get through a bunch of the mail. Check back in for updates.

The next WBAI LSB meeting should be held on Wednesday, January 8, 2014, at 7:00 PM at Alwan-for-the-arts, 16 Beaver Street, 4th floor, in downtown Manhattan. After the LSB meeting there will be a Delegates' Assembly, which will vote for the WBAI Directors for 2014.

We have fallen too far behind on our mail, so we plan to read some on the air tonight and continue catching up with it.

You can always send us some E-mail.

Mathematician Alan Turing was given a pardon this past fortnight. He'd been convicted of being queer in england in 1952, after he'd done a great deal to help the Allies win World War II. In 1954, he committed suicide over the conviction. 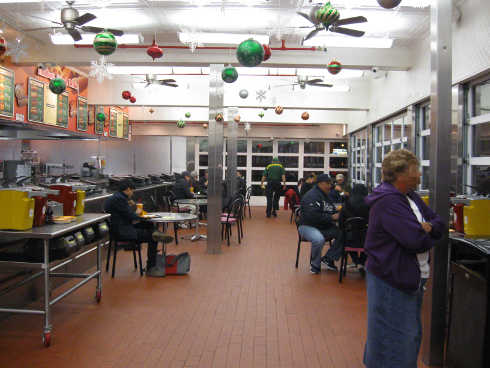 Nathan's Put Their Tables & Chairs In At Last

In the past fortnight we went to Coney Island.

It was unseasonably warm on December 22, getting up to about 70° F. So we ended up eating out among the picnic tables that day, but we were glad to see that during the most recent snowstorm Nathan's had finally decided to install their tables and chairs.

Here's a shot of how they have some tables arranged at one end of the place. And there were people begging among the tables.

We have heard that just before the end of 2013, the community garden at Coney Island (not pictured) was bulldozed. That's not good news.