It's Monday morning, June 9, 2014, 01:25, and I've updated this Web page with a link to another Web page, a new one, which tells about the Coney Island adventure that we'd talked about on this program. The original top of this page follows the arrow. ⇒ We plan to get to the below topics and more tonight. We're also hoping to avoid any drunks falling over and stopping our train tonight, but you never know. Check back for updates.

This meeting as mostly about elections. Here's a written Treasurer's Report I had posted for the meeting.

Here are the Officers elected for 2014

This Brinkley person is a faction operative. The vote was tied at 10 to 10. Brinkley won the coin toss. His campaign speech for the office of Chair of the WBAI LSB consisted of saying he didn't understand Robert's Rules of Order, which is what we're required by law to use to run the meetings. He's already shown that he really doesn't understand a meeting run by rules, or how to be fair. At this meeting he was questioning people's motivations for what they'd said. This is strictly forbidden for anyone, and especially the chair of the meeting. Well, we'll see how this all goes.

The other three officers are not faction operatives. I got reelected Treasurer.

After the LSB meeting we had a Delegates' Assembly to elect Directors to the Pacifica National Board, where the real power lies in Pacifica.

These are the WBAI Directors elected for 2014

This Web page is being written before we leave for the program, but we hope that we don't run into the same sort of delay we ran into for the last program.

About the Super Bowl: we don't care about it, so this program will reflect that level of enthusiasm.

We plan to talk about The Beatles 50 years ago tonight.

We plan to read some mail on the air tonight and continue catching up with it.

You can always send us some E-mail. 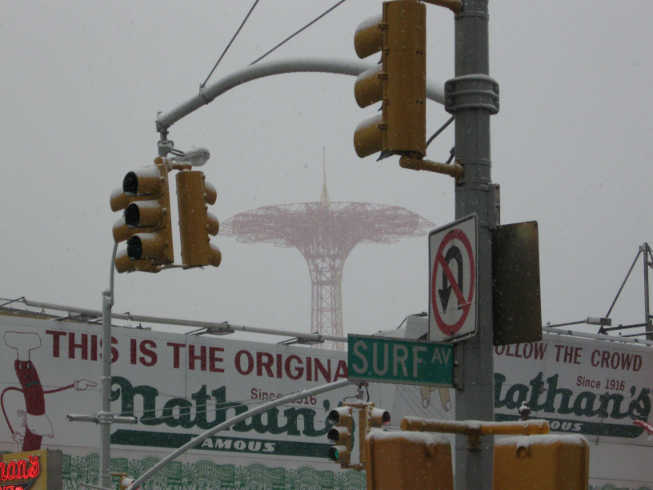 We had another of our off-season excursions to Coney Island this past fortnight. And we went down there just when an arctic cold front was coming through. Oh, what a shivering time was had.

I've posted an entire Web page about that adventure here.