James Comey is mildly nauseous? Well, the rest of us are tremendously nauseous! We plan to talk about some of the political developments over this past fortnight, but we also will welcome in the Middle Third of 2017. It's a wet one, so far, especially tonight. We will also be pitching on this program, so we hope that our listeners will be generous and pledge while we're on the air, or pledge while listening to the archive, which now appears to be an option. Check back for updates.

The Middle Third is here again! The Middle Third consists of the central four months of the calendar year, the months of May, June, July and August. I like this part of the year the best. It is, usually, warm and there's more sunlight. In addition, the Sun sets after seven o'clock in the evening for the entire duration of the Middle Third.

We'll talk a little bit about the Middle Third, which is getting off to a notably gloomy, and wet, start this year. Yesterday set a record for one day rainfall in Greater New York, we got 3.01 inches of rain. Lots of floods. I'm hoping we get a lot more Sun and warmth for the next four months.

The WBAI Spring 2017, 'thon is on. Management has already been moving programs around based on the programs giving evidence of having listeners, which is accomplished in the WBAI Managerial mind by how much the programs raise during these on-air fund raisers. I hope we raise some money for the station this time. 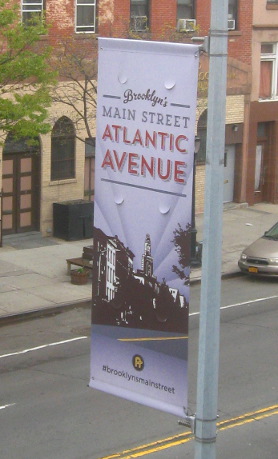 View From A WBAI Window

Here's a photograph I took after the last radio program. We're not getting enough nice, sunny days this mid-Spring, it would seem.

And I do not believe in that yuppie bullshit claim about Atlantic Aver. being Brooklyn's Main Street. Bedford Ave. is long, Flatbush Ave. is busier and goes through more of Brooklyn, and there are a bunch of other streets and avenues that are equal to Atlantic Ave. in the borough. Well, some people need to live amid superlatives. We have one of those in the White House at this moment.