Well, between idiots in Kenya going on about gay lions and idiots in Washington, D.C. getting indicted for acts against America, it's hard to think that there's any hope for humanity at all. On this program I plan to talk about my pre-draft physical, which happened 50 years ago. Of course there will be a lot of other stuff discussed and we will have to pitch as well. We hope you'll donate something to WBAI during this radio program.

The next WBAI LSB meeting is scheduled to be held on November 8, 2017, at the Theater for the New City, at 155 First Ave. in Manhattan. The meeting is supposed to start at 7:00 PM.

The WBAI Fall 2017, 'thon is on. Management has moved programs around based on their evidence of having listeners, which is accomplished in the WBAI Managerial mind by how much the programs raise during these on-air fund raisers. I hope we raise some money for the station this time.

Once again we're offering a premium! It's the official WBAI T-shirt for $65. Of course we'll be quite glad if people will donate just for the radio program. Hey, you could get more than one T-shirt, if you wanted. 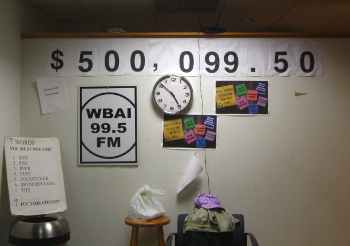 This Is The 'Thon's Goal

It was exactly 50 years ago today that I had to report for what was usually called in those days my army physical. It was actually the draft physical or the pre-induction physical. Oh, it was a very unpleasant experience. It was not, however anything near as unpleasant as the time I spent after I was drafted a little more than 10 weeks later.

Yes, I plan to talk about the awful experience.

Speaking of anniversaries, I've been a part of WBAI for 36 years, as of this month. I do not recall the exact day I joined the Gay Men's Collective at WBAI, but it was definitely in November 1981. Yeah, I'll have something to say about that, too.

In other anniversary news, it will be 100 years ago this coming Tuesday, November 7, when a bunch of thugs calling themselves Communists attacked the Russian Provisional Government and established the Soviet Union, one of the most murderous and oppressive regimes in history. I don't know if we'll get to that on this program.

So a guy working at Twitter decided to strike a blow on his final day there. Well, at least we got a laugh out of it. Too bad Trump is too stupid to realize that he should just shut up.

There's an idiotic bureaucrat in Kenya who is all up in arms about gay male lions. This moron wants to give the lions, who were photographed having sex with each other, counseling. Either that or he wants the demonic spirits removed from them. Wow, anti-gay bigotry really does make people even more stupid. 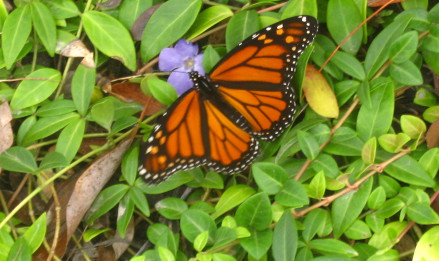 Oh, it was late October and Pickles of the North and I were at Coney Island when we spotted this Monarch Butterfly making a pit stop at a flower. Well, we wish the Monarch Butterfly well on its long trip, but it's pretty late in the season to still be in Brooklyn, and a sudden downturn in the temperature could doom this one to not get any farther along its slight. Still, it was very nice looking.