It's Tuesday night, December 19, 2017, 23:18, and I've updated this Web page with the information about the preemption and the date and time of the Winter solstice. I'm hoping to update this page more. The original top of this page follows the arrow. ⇒ Well, the Senate passed some bad legislation right before this program. We plan to talk about that, Flynn, Trump and then do some science, and laugh at some pseudo-science.

The next WBAI LSB meeting is scheduled to be held on December 13, at a location to be announced. The meeting is supposed to start at 7:00 PM.

Well, they did it. The Senate Republicans passed the tax reform bill by a vote of 51 to 49 in the wee hours of this morning. We plan to talk about that on this program.

We plan to talk about Michael Flynn, former National Security Advisor and Lieutenant General, who has pleaded guilty to colluding with America's enemies. This is probably the worst bit of treason since Robert E. Lee resigned his commission to go lead the Confederate army in the Civil War.

There are some science topics that we plan to go into tonight. 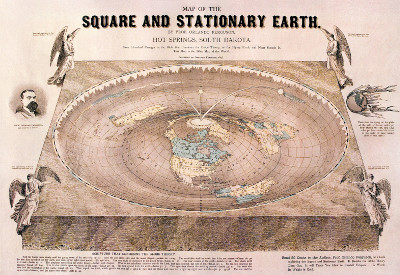 A Flat Earth Map of the Late 19th Century

We also plan to talk about some silliness with people purporting to believe in a flat Earth. Jeez.

We were surprised to find that we were preempted for what should have been our December 16, 2017, radio program. As a result we didn't get to wish everyone a merry Isaac Newton's Birthday, and a Merry Solstice. I suppose we should do that now. The Winter solsticve will occur on Thursday, December 21, 2017, at 11:28 AM (ET). For more on season and sub-season dates look here.