Yeah, we're rushing out again. We're hoping that the MTA doesn't throw us any curves, again. We plan to get to the below topics and a bunch more on this program; there is just so much happening. I can't promise that I'll be updating this page, but I sure hope that I do.

We're supposed to be pitching for BAI Buddies, which is the name of the sustaining membership project here at WBAI. So if you'd like to give us at least one more BAI Buddy that can be credited to this radio program, we already have one, thanks Pat, please go to this Web page on WBAI's Web site and be sure to choose Back of the Book as the program you want to contribute in the name of. We hope that one or more of you can do this. 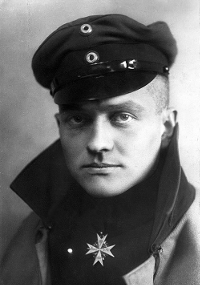 Today is the 100th anniversary of the death of Manfred von Richthofen, aka the Red Baron, who was shot down over France. He's still famous as a World War I flying ace. We'll talk a little bit about him, although we're hoping to get to a bunch of science topics on this program.

How badly will Kim Jong Un play Donald Trump? The Trump Administration has already sent the CIA Director out to North Korea for secret meetings. The North Koreans must be thrilled at that alone. We hear that Trump plans to wing the negotiations. He'll rely on his uninformed impulses to guide him through the nuclear talks. We're doomed!

We entered mid-Spring yesterday morning. The exact minute of mid-Spring will be on May 5, 2018, at 9:11 PM (ET). That will be two weeks from now. We really hope that the weather has improved by then!