This will be our annual Christopher Street Liberation Day March program. Pickles of the North and R. Paul went to the march his past Sunday and we'll talk about it. R. Paul will talk about the past, as well. We also plan to talk about some other things, and we may even get to some mail on this radio program. I'm hoping to update this page at some point, so check in and see if I do.

The next WBAI LSB meeting is scheduled to be held on Wednesday, July 11, at a location to be announced. The meeting is supposed to start at 7:00 PM. 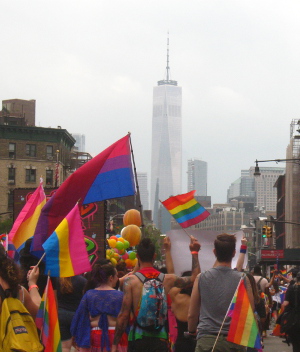 The 49th annual Christopher Street Liberation Day March was held last Sunday, June 24, 2018, and Pickles of the North and I were glad to be there. We had been concerned that with the new way that Heritage of Pride, the group that runs the march these days,, was doing things that we might be excluded. It was touch and go for a while there, but we were able to march with the New York Area Bisexual Network again.

The Heritage of Pride folks initiated a new things this year, you had to wear a wrist band, that you had to pay for, in order to march! And they were limiting all groups to no more than 200 marchers. Well, we were concerned that we might not be able to march this year, with these kinds of restrictions. There no small amount of stress when I hear about this new feature of the march.

The march route was rather bizarre this year. The official step-off point started from 7th Ave. and W. 16th St. The route marched down 7th Ave. and then made a hairpin turn onto Christopher St., got onto W. 8th St. and then went up 5th Ave. to W. 29th St. I have to say that 5th Ave. and W. 29th St. does not have any kind of significance to the gay liberation movement, does that intersection have any relevance to anything gay, lesbian, bisexual, transgendered, queer or other?

From what Heritage of Pride has written this year it appears that the 49th march was a dress rehearsal for the 50th march, which should happen next year. Heritage of Pride wants to cut down on the number of people marching! Sounds like they don't understand the real basis for having a march. The front of the march was jam packed with politicians, so maybe they think it's all about them. Well, on this program we plan to have a lot to say about this year's march.

We also will say a few things about past marches and other things from the days when gay liberation was in the streets and the conservatives were mostly hiding from us.