It's Sunday morning, January 27, 2019, 02:28, and I've updated this Web page with the new information about the WBAI archives. I plan to do some more updates on this Web page. The original top of this page follows the arrow. ⇒ Yesterday Donnie Bonespur Trump blinked. So the entire government is reopening, and will stay opened for the next three weeks. We'll talk about that, about a very cold total lunar eclipse, about various political things going on and about some science topics as well. We are hoping to squeeze in an entire segment on the ice that's melting in antarctica and how it may result in a big sea level rise. We hope to update this Web page some day.

Since the General Manager has banned Sidney Smith from WBAI he's not alternating with us on the air. As of last week, there's a regular, pre-recorded, program in the alternate week's time slot.

Donnie Bonespur Trump has blinked! Yes, the record setting government shutdown was ended after 35 days when Trump caved to the pressure and signed the bill into law that had been passed by both houses of congress that reopened the entire government for three weeks. And he did not get his stupid border wall. Yeah, we're going to talk about that, all right!

We're hoping to get to some listener mail on this program.

I'm also hoping to get to talk about an E-mail scam that I've been receiving for a couple of weeks now. Whether we get to it on this program or not, here's a link to a Web page about this scam, which you might have gotten yourself. Don't worry, the link goes to another page on this site and it's the usual, old static Web page with nothing nefarious on it. 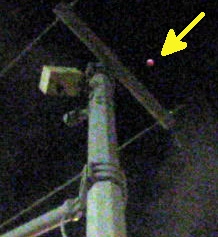 Not A Great Eclipse Photograph

There was a total lunar eclipse on the night/morning of January 20/21, 2019. Pickles of the North and i went out to look at it during the totality of the event. This is the best photograph we could get of it. This is actually a still taken from a very short video that I was able to shoot of it. The still photographs just didn't show anything other than the light pole.

So we obviously went out onto the streets of Brooklyn to see this lunar eclipse. in the photograph the very tiny, fully eclipsed Moon is indicated by the arrow.

And it was cold out there! I used an anemometer to measure the slightly sheltered place where we stood, and it was 14° F. with 45% relative humidity. When we moved from that spot and the wind could get us full force it felt a lot colder.

Pickles of the North plans to have a thing or three to say about the current IRS forms that we have to deal with this tax season.

The exact minute of Winter will occur on Monday, February 4, 2019, at 5:10 AM (ET). After that point we'll be in the second half of Winter and will be looking forward to Spring. Oh, I want to get out of the cold! For more on the seasons and sub-seasons look here.