So we're pitching yet again. Well, it's better than being preempted for six full weeks while the substitute programming they shove into the time slot raises zero, or close to it. We hope that you'll all pledge during this program. We plan to get to the below topics plus whatever science related stuff we can cram in. I may be able to update this Web page at some point.

The Pacifica elections are over, for now. The next set should start up within weeks! Yeah, more of this crazy election stuff. We are told that the results of the election will be available between March 15, and March 20. I suspect that the WBAI LSB will meet on its regularly scheduled night of April 10. We'll see how that works out. 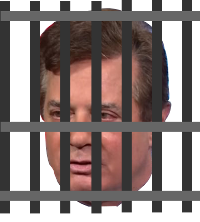 Yeah, He's Behind Those Bars

So the good news is that Paul Manafort is behind bars at this time. The bad news is that the apparently biased judge in this case, one T.S. Ellis to a mere 47 months in prison! The guidelines for the crimes of which Manafort was convicted state that the sentence must be between 19½ and 24 years! judge Ellis went out of his way to say that the trial had nothing to do with Manafort colluding with the Russians during the 2016, election, and Ellis also noted that Manafort never apologized for his criminal behavior. Still, the Reagan-appointed judge gave Manafort a remarkably short sentence. Judge Ellis lauded Manafort for being generous and friendly and said that, beside the crimes he committed, Manafort had, "Lived an otherwise blameless life." Wow! What the hell is wrong with that judge? Maybe he's just a big Trump supporter.

The friendly, generous and otherwise blameless Manafort gets sentenced next week for his illegal lobbying and conspiracy against the United States! Yeah, right, blameless.

Donnie Bonespur Trump finally went to Viet Nam this past fortnight. He was there to meet with North Korean dictator Kim Jong Un about those missiles and nukes that Kim likes so much.

Well, it looks like that bonespur of his kicked in because Trump and Kim broke off the negotiations and didn't even have their scheduled working lunch together. The signing ceremony was also called off, there was nothing to sign. No deal!

Back in America Trump blamed the failure of the shortened negotiations on President Obama! You can't make this stuff up.

We really hope to get some science related topics in on this program.