We plan to talk about the below topics, and more, if possible. We may even get to some listener mail. It's been a busy fortnight. We'll have to leave earlier than usual this morning because it's raining like crazy out there and the usual rush to the subway could end up getting us a lot wetter than we'd otherwise get. I am hoping to update this Web page, and some previous Web pages, as soon as I can get this HTNL editor to work right on the new computer. So far, no luck in that area.

The Pacifica elections are over, for now. The next set should start up within weeks! Yeah, more of this crazy election stuff. The elections are over and the independent listeners and Staff came out well in it. I'll update this Web page with the results very soon. The good news is that the good guys won a majority on the WBAI LSB.

Oh, you know that we can't resist talking about the Mueller Report on this program. We'll try to avoid having it take over the entire program. And what of im peachment? Is it a great idea or a bad idea? 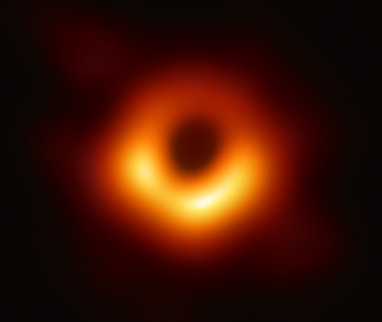 The Image of the Black Hole in M87
photo credit: Event Horizon Telescope

Well of course we're going to talok about the first ever imaging of a black hole on this program. This is an image of the super massive black hole at the heart of M87, a galaxy that's about 50 million light years away. M87 has been famous for decades due to the enormous jet of material that can be seen being ejected from its center. It's the black hold that's doing that ejecting. Some of the material in that jet is moving at a sizeable fraction of the speed of light.