We plan to get to the below topics and more on this radio program. Apparently we have to run out and catch a shuttle bus in order to get to the train this morning, so I'd better not spend too much time on this We page. I plan to update this Web page over the next couple of weeks.

The next WBAI LSB meeting is scheduled to be held on July 10, 2019, at a location to be announced. These meetings are usually supposed to start at 7:00 PM.

The LSB got some small amount of business done. There was a controversy involving standing committees and special committees. Yeah, I was involved in that.

The Pacifica elections are over, for now. This past fortnight I've gotten an E-mail from the National Elections Supervisor that nominations for, WBAI's local board will open on June 1, 2019, and will close on June 30. Yeah, more of this crazy election stuff. Let's hope that the independent candidates do well in this election too; the very existence of WBAI depends on it.

With the elections around Pacifica having gone well the PNB may be poised to help WBAI survive, rather than being a detriment as has happened some years ago. I'll be trying to update my Web pages about all of this in the near future, now that I've gotten my ancient HTML editor working on the new computer.

We plan to talk about what happened to R. Paul's back right after we went off the air on June 1. Oh, it is not a pleasant memory. 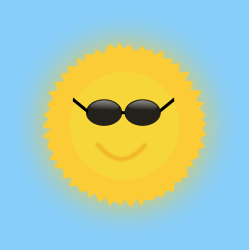 The Summer Solstice will occur next Friday morning June 21, 2019, at 11:54 AM (ET), and we'll be glad to celebrate the day. For more on the dates of the seasons and sub-seasons take a look at the chart I've made about this stuff.

Pickles of the North will talk about some climate change issues, as well as the upcoming Mermaid Parade at Coney Island.

We have some mail to read from various sources. If possible we will read some of that listener mail on this radio program. While we are unlikely to read all of it, and thus catch up, we will read what we can and do so on subsequent radio programs and try to get it all read over time. If you want to send us E-mail you can send it via this link.

In the past fortnight I have updated the following Web pages: The page for the June 1, 2019, radio program and the Treasurer's Report page.

UPDATE: In June 2012, I ended up having to salvage the bleepin' blue board, and so I'm the moderator on it now.