So it's yet another pitching program, and we plan to get to some of the topics below, and maybe more, but we can't guarantee what will happen on a pitching program. I will try to update this Web page in the near future.

The next WBAI LSB meeting is scheduled to be held on January 8, 2020, at a location to be announced.

The WBAI Fall 2019, 'thon is happening right now. Management has moved programs around based on their evidence of having listeners, which is accomplished in the WBAI Managerial mind by how much the programs raise during these on-air fund raisers and by the Nielsen ratings, which the station is now getting after years of not getting any ratings at all. I hope we raise some money for the station this time. 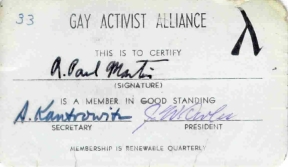 At some point this past fortnight we went past the 50th anniversary of the founding of the Gay Activists Alliance (GAA). I wasn't there for that founding. I got into GAA on March 26, 1970. On Wikipedia I see that they tag the date as December 21, 1969. I recall some of the founders telling me that the official date was December 22. It might be that they started on the 21st, but didn't get the founding done until the 22nd. Either way, an organization that was very important to my life was founded 50 years ago.

To the left, on most browsers, is a copy of my first night of issue GAA membership card. The membership cards didn't get issued until a number of months after the organization was founded. I got to that particular meeting late, so I got number 33 on my card. I've gone on about this on this Web site before. If we're still on the air around the end of March I suppose Ill go on and on about getting into GAA.

Sometimes I find that I will unexpectedly learn something in some way that I had not anticipated. Below is an early Gasoline Alley comic strip. When I looked at it I was puzzled because the characters are talking about Prohibition happening in July 1919. I had known since I was a kid that nationwide Prohibition began in the United States on January 16, 1920. Turns out the Prohibitionists had slipped a little something in ahead of the official implementation of the 18th Amendment. Through sneaky means the United States actually began its Prohibition Era on July 1, 1919. Wags referred to that date as July Thirsty First. 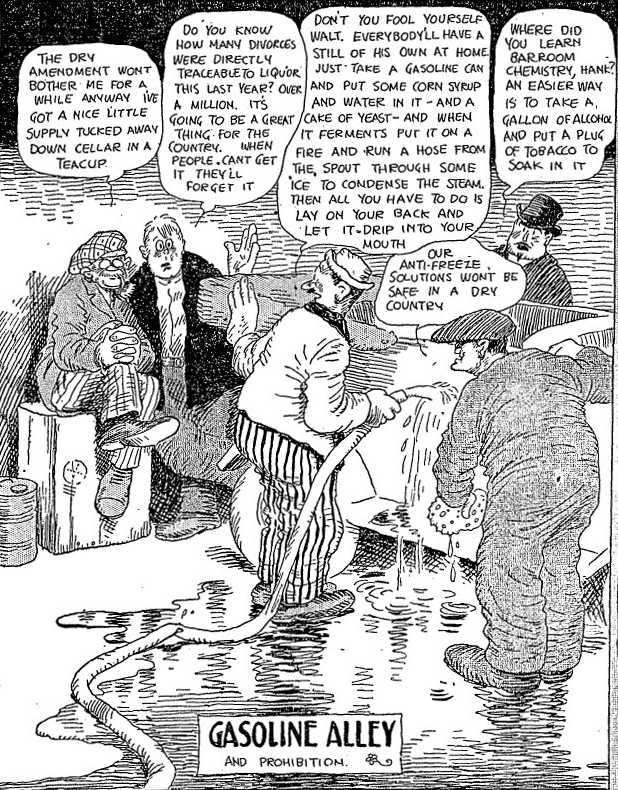 Pickles of the North plans to talk about some upcoming holidays.