It's Saturday morning, February 8, 2020, 01:11, and I have updated this Web page with some of the things we'd talked about on this radio program. The original top of this page follows the arrow. ⇒ In quite a rush this morning. We plan to get to a lot more than what's on this page right now. We hope to update this page too.

The next WBAI LSB meeting is scheduled to be held on February 12, 2020, at a location to be announced.

At this meeting the WBAI LSB elected Directors to the PNB and debated and defeated a bylaws replacement proposal from some people who are hostile to WBAI, and to Pacifica, in my opinion. There was no time for a Treasurer's Report. I put out a written Treasurer's Report for all to read.

Jeez, Trumpoids Can Only Create Corruption!

We plan to talk about this absurd situation where Trump's Space Force has a logo that looks very plagiarized from the Star Trek Star Fleet logo. Really, they thought no one would notice? 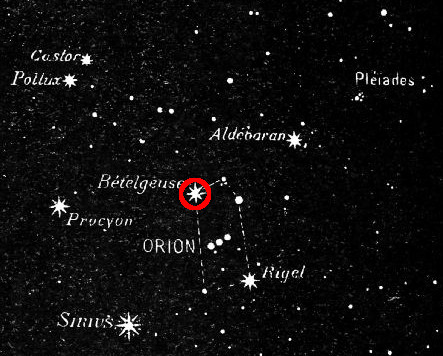 Betelgeuse is Circled in Red

We talked about recent findings that the star Betelgeuse, in the constellation Orion, is getting dimmer. That it's getting dimmer is not the real story, Betelgeuse is a variable red super giant star, which means that it gets brighter and dimmer over time. The fuss about it dimming right now is that it is dimming more than it has been observed to have dimmed ever before. Now ever before needs some perspective. People have been looking at Betelgeuse since humans came into existence, but it hasn't been possible to accurately measure the brightness of the star for more than, at most, a couple of hundred years. But in the time when it's been getting measured these latest reading show the star getting dimmer than ever.

The import of this dimming is that some astronomers believe that this may presage the star's going supernova, which means that the star would explode. There has not been a supernova visible in the Milky Way galaxy, where we are, since just before the application of the telescope to astronomy. When Betelgeuse does blow, and at some point it must, it will explode as a type II supernova. The star is about 640 light years from Earth and when it goes it will shine as brightly as the Full Moon for some months, at least. But when will Betelgeuse go? Well, scientists say that it's probably not going to go for anywhere from 100,000 to 300,000 years from now. Yeah, these things do not happen on human time scales. In any event, at the distance of Betelgeuse a supernova would pose no threat to life on Earth. In fact unless a star goes supernova within about 30 light years from Earth all we'd get from it wold be a light show that no one has seen in over 400 years. Still, the astrophysicists are keeping tabs on the big, red star in Orion for any signs that it may rewrite the text books on just when a red super giant star will blow up.

At the end of this program I mentioned that the United State Chess Federation (USCF) has announced that they are putting the digitized issues of two chess magazines they own on the Web. One magazine is Chess Review, which published from 1933, to 1969, when it merged with Chess Life magazine, which was, and remains, the official organ of the USCF. The entire run of Chess Review is posted and the run of Chess Life from its start in 1946, through 2018, is also posted. I've been looking through the old Chess Review issues. I am seeing photographs of people who were middle aged or old when I was active in chess 50 or so years ago when they were young. For me it's interesting, you might have a good time looking through these old magazines too. Both sets of magazines can be found on the USCF Web site.

One formerly popular mailing list is the “NewPacifica” mailing list. Founded October 31, 2000, this list has been moribund for a couple of years due to de facto censorship by the group owner. As of February 2020, it had 696 subscribers coast to coast, but postings on it are very infrequent now.