We did our fifth pandemic edition of the program this time around. It still feel so strange pre-recording what we're used to doing live. We covered the below topics and a little more. We are told that the problems with the archives will be fixed later today. If they're not I'll post audio of the last two programs on the Web. I may be able to add a little more to this Web page at some point.

The next WBAI LSB meeting is scheduled to be held on June 10, 2020, it will be held as a teleconference meeting, as the three previous meetings were because of the pandemic.

The LSB met via teleconference. Results of the election to the Program Director Search Committee of non-LSB members were announced. There were technical difficulties during the meeting again via a certain service that has privacy and security problems. Before the meeting I had put out a written Treasurer's Report for all to read. 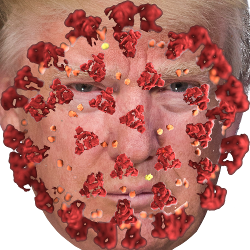 We talked about the current pandemic and the crises around it caused by the incompetent moron currently residing in the White House. He's pushing for reopening everything and he's completely oblivious to the death toll he's inviting. He's oblivious to it because he's callous about it. He's pushing the ineffective, and in some cases deadly, hydroxycholoroquine anti-malaria drug that some f his pals seem to have investments in.

We talked about our current pandemic lifestyle and the challenges we're facing.

Want to see the spectacular Comet C/2019 Y4 (ATLAS) as it slides past the Earth? Well, you can't. Not with the naked eye, at least. As happens with these things sometimes it had broken up and is getting dimmer rather than brighter as it enters the inner Solar System. We talked about the serious of recently ballyhooed spectacular comets that had been predicted, and which have all disintegrated.

We talked about the saying we're hear many times that says that no one has ever been killed by being hit by a meteorite.We gave an example of a woman in the '50s who had been hit by one that had come through the roof of her house, and we talked about a Viking Village that had probably been obliterated by a meteorite breaking up over it. One this program we talked about an incident in the Ottoman Empire when on August 10, 1888, at around 8:30 PM a fireball was observed to have broken up above a village in what is now Iraq and the fragments of rock pelted the area for 10 minutes. In that time it was recorded that one man was killed and another was paralyzed by being hit by the stones from the sky. Well, we always knew that it could happen, now we're got a record of it.