We got our sixth pandemic edition of Back of the Book recorded and posted in time for this program to air in its regular timeslot. We covered the below topics, mostly related to the pandemic and how Trump and others are behaving in it, and we pitched. Since we recorded the program about 12 hours before it aired we have no idea how it did with regard to on-air fund raising. I may be able to update this Web page soon.

The next WBAI LSB meeting is scheduled to be held on June 10, 2020, it will be held as a teleconference meeting, as the three previous meetings were because of the pandemic.

There were technical difficulties during the meeting again via a certain service that has privacy and security problems. Before the meeting I had put out a written Treasurer's Report for all to read. 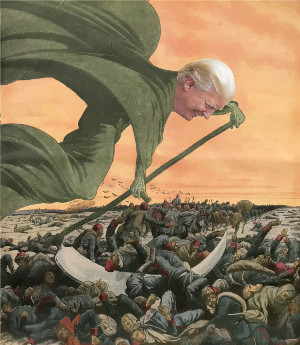 Trump's Role in the Pandemic

Of course there was no way we could not talk about Trump and the pandemic we're all still suffering through.

A couple of days before this program aired we blew through the round number of 100,000 Americans killed by this pandemic. As I write this Web page the global total is 365,252 deaths from COVID-19.

All of this could have been avoided if only the Tramp administration had been about running the most powerful country in the world rather than stoking the ego of a malignant narcissist.

We talked about the rush to reopen everything. Pickles of the North read from the 1722, novel A Journal of the Plague Year by Daniel DeFoe. The novel is about the 1665-66 bubonic plague epidemic in London, England. Then, as now, when people thought they'd just stop isolating the number of cases of the disease and the deaths went up again.

We talked about a report from researchers at Carnegie Mellon University that said fake social media accounts are fueling a worldwide push to loosen pandemic lockdown restrictions and get workers back into their jobs. And the researchers say that the sources of these trolls and bots may be Russian and Chinese propagandists who are eager to see Americans rushing back to work, and spreading the disease. And besides propagandists from Russia and the so-called People's Republic of China we also have Donnie Bonespur Trump saying the same thing. Maybe he's just taking order from one of those entities.

A truly bizarre and tragic statistic which is sadly in keeping with these times is that a poll taken last week found 44% of Republicans think Bill Gates is working on a coronavirus vaccine because he wants to plant a microchip in them and monitor their movements.

We also talked a bit about AIDS activist and playwright Larry Kramer, who died this past week. I used to cover some of his activities and interviewed him more than once when I was a part of the WBAI Gay Men's collective.