This was our 34th anniversary program. We didn't talk about the program's past as much as we have in the past. Maybe the pandemic is taking up just that much attention these days. We covered the below topics and more. I'll be updating this Web page pretty soon, so check back later in the week to see what's new up here.

The next WBAI LSB meeting is scheduled to be held on September 9, 2020, it will be held as a teleconference meeting, as the six previous meetings were because of the pandemic.

This Is Our 34th Anniversary Program!

Yes, we read Franz Kafka's parable Before the Law, and we mostly just did our regular radio program.

We talked about Trump on this program, no way around that. His underling Postmaster General Louis DeJoy continued to destroy the United States Postal Service. He told Congress that he's stop the destruction for a while, but then he said that he wouldn't reverse it by, for example, putting back the sorting machines. We wondered aloud if the sorting machines, which are crucial to handling huge amounts of mail in a timely manner, were all or mostly being removed from so-called blue states?

We talked about the latest report about Greenland losing its ice cap. The net loss of ice in July of 2019, was the biggest in years. The frozen island lost more than 530 billion metric tons of ice last July. Now, even at that rate it will take millions of years for all of the ice on Greenland to melt, but there may already be effects coming off the constant melting. Greenland's melting ice contributes around a quarter inch a year to sea level rise and there is speculation that all of the cold water being dumped into the North Atlantic Ocean may have an effect on the ocean currents that are so important to ocean life and which help to keep northern Europe warmer than it would otherwise be. 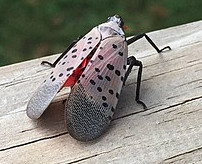 We talked about the latest invasive species menace that's happening, the Spotted Lanternfly. And I am required to say that I cropped the image and its presented here under the Creative Commons Attribution-Share Alike 4.0 International license.