It's Saturday, October 31, 2020, 03:29 and I've updated this Web page a little bit. More updating to come. The original top of this page follows the arrow. ⇒ Oh, it's another strange, pre-recorded radio program. Below is only one thing we did on this program. We will be updating this Web page as soon as we're able to.

The next WBAI LSB meeting is scheduled to be held on November 11, 2020, it will be held as a teleconference meeting, as the eight previous public meetings were because of the pandemic.

The usual disruptions were endured. Before the meeting I had put out a written Treasurer's Report for all to read. 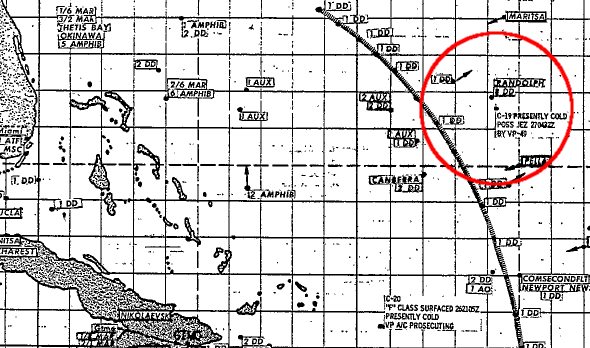 We're going to talk about the time during the Cuban Missile Crisis of October 1962, when the world as we know it nearly ended.

The Cuban Missile Crisis was happening 58 years ago. It was on October 16, 1962 that President Kennedy was briefed about the Soviet missiles being emplaced in Cuba. On October 22, at 7:00 PM Kennedy addressed the nation about it and essentially told the world.

There was a lot going on around these developments. The Kennedy Administration was sure that if they did nothing that the Soviets would take this as a sign that the Americans were afraid of confrontations that could result in a nuclear exchange. The American administration believed that if they allowed the missiles to be installed that the Soviets would take over West Berlin soon thereafter. We all know that a blockade was the solution arrived at by the Kennedy Administration, which called it a quarantine on all offensive military equipment under shipment to Cuba. There was rhetoric back and forth. On October 27, 1962, referred to as Black Saturday, USAF Major Rudolf Anderson flew a U2 reconnaissance mission over Cuba. At about noon that day the aircraft was struck by an SA-2 surface-to-air missile launched from Cuba, shooting down the U2 and killing Major Anderson. This was done in violation of Soviet orders. The next day Soviet Premiere Nikita Khrushchev told his son Sergei that the shooting down of Anderson's U-2 was by the Cuban military at the direction of Raul Castro. This made things very tense. The same day there was another confrontation between heavily armed American and Soviet aircraft over the Bering Sea. It was a very tense day.

The declassified map above shows the situation with the American quarantine, aka blockade, as of midnight on October 27/28, 1962. At the center of the red circle is the submarine designated C19 by the United States Navy but named Б-59 by the Soviet Navy, which translates to B59 in English. 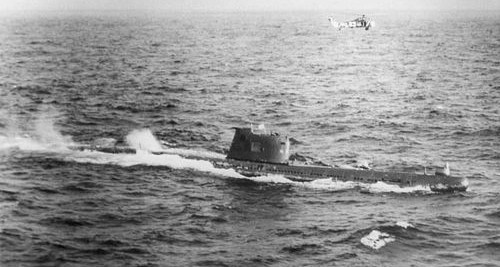 The quarantine continued and U.S. Navy ships sought to enforce it. Eleven United States Navy destroyers and the aircraft carrier USS Randolph formed a carrier group that was doing quarantine patrol. Meanwhile Soviet diesel powered submarine Б-59 was still heading to Cuba. The destroyers detected the Б-59 and dropped signaling depth charges that were about the power of hand grenades, and therefore harmless to a submarine, to signal the Б-59 that they were discovered and should surface.

Well, the Б-59 had been out of touch for a while, and while submerged they couldn't get any radio signals. The captain of the Б-59 thought that World War III might have broken out. Also the American depth charge signals were not quite the same as the Soviet ones.

What was largely unknown outside of a small number of Soviet Naval personnel and Soviet leaders was that the Б-59 carried a torpedo with a nuclear warhead. The captain of the Б-59 wanted to shoot the nuclear torpedo at the carrier group. The warhead was powerful enough to have taken out all or most of the ships. It's possible it could also have taken out the Б-59 as well. The captain of the Б-59 needed unanimous permission of all officers on board to fire it. The captain and the political officer agreed the nuclear torpedo should be used, but the third officer, Commodore Vasily Arkhipov refused. He held out against their pressure. In doing do he probably saved hundreds of millions of lives. If the Randolph's carrier group had been destroyed by a nuclear blast the Americans would have probably assumed that a nuclear missile fired from Cuba had done it and would have retaliated, as per Kennedy's warning days earlier to Khrushchev.

As it turned out the Б-59 surfaced and that was the end of that incident. Ironically it was on that very day that Kennedy and Khrushchev were secretly reaching an agreement on how to peacefully end the crisis. It could all have ended so easily were it not for Vasily Arkhipov's refusal to go along.

So on this program we saluted Vasily Arkhipov for saving all of those lives and Major Anderson who gave his life to keep the Kennedy Administration informed and able to understand the situation.

On Monday, October 12, I got a notice about the above. The venerable, and often frustrating, Yahoo! Groups is going to be shut down on December 15, 2020. Yahoo! Groups came into being in the late 20th Century. used to consist of mailing lists and Web space where last December when Yahoo! Removed all "content." This is going to be a hardship on a whole bunch of people in Pacifica. There are Producers' lists, and various in those groups even though they were reduced to just E-mail lists last December when Yahoo! Removed all "content." Now those mailing lists are going away. Lots of Pacifica history is about to be erased.