It's Friday, November 20, 2020, 08:49, and this Web page is finished. I've updated some parts and I've put in Pickles of the North's segment on Halloween, along with an explanation of why it's here and was not broadcast. The original top of this page follows the arrow. ⇒ So this was our 16th pandemic program. We talked about the below topics and more. We're trying to keep safe, and R. Paul has voted. We hope that all of you are safe too, and it would be so good if all of you voted this coming Tuesday. I'll try to update this Web page soon.

The next WBAI LSB meeting is scheduled to be held on November 11, 2020, it will be held as a teleconference meeting, as the eight previous public meetings were because of the pandemic.

The usual disruptions were endured. Before the meeting I had put out a written Treasurer's Report for all to read.

R. Paul Voted, You Vote Too!

So they've plugged in this creature from a Catholic cult group to help make sure that Trump wins any close calls in the election. Will there be a bigger Constitutional crisis in the next few days than we've seen before? How much history can we stand to witness in a short time?

We had quite a few things to say about the current pandemic, which is resurging all over the world, and about the moron in the White House who's been making it all so much worse.

Trump continues to spread disease. He's holding these packed, maskless rallies all over the place in an effort to get reelected. At some rallies attendees are passing out from the heat. At other rallies attendees are waiting in vain in cold weather for buses that never come. This shows how much he really cares about people, if his reaction to the pandemic didn't already do that. Now everyone around Pence is infected. Trump and Pence just continue to lie. 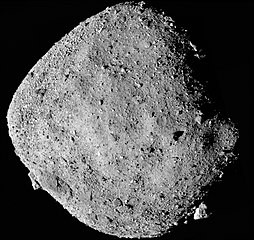 Bennu is a carbonaceous near-Earth asteroid. So it contains a lot of carbon. Those carbon compounds will be of especial interest to the scientists who will be examining the material that OSIRIS-REx picked up.

Since Bennu is a near Earth asteroid it comes quite close, in cosmic terms, to the Earth at times. In fact it will get quite close in 2135, and that event may set it on a course to collide with the Earth some time between 2175, and 2199. On September 24, 2196, there is a 1 in 11,000 chance of an Earth impact. So people better start partying like it's 2199 at some point. Right now Bennu is more than 200 million miles from Earth.

The October 20th, touch and go sample mission was apparently so successful that the mylar flap that is supposed to seal the sample container is wedged slightly open by some of the small rocks that were collected, and some of the other material that was collected is escaping back out in to space. Well, that's a bit of a problem. The estimate is that they have retrieved about 400 grams of material from the asteroid, but it's possible that they could have almost a kilogram of stuff in there.

Right now the team handling Osiris-REx is trying to figure out what to do. They are concerned about losing some of that precious stuff they've retrieved. They need to get the collection head into the Sample Return Capsule ASAP. They had a way to weigh the sample by spinning the spacecraft, but they aren't going to do that now because they would probably lose more of the material that way. Dante Lauretta of the University of Arizona, the mission's principal investigator, said, I don't see a way out of that, I think we have to accept that and reoptimize. Well, I guess we'll get a bunch of asteroid stuff no matter what.

How many science fiction stories have featured retrievals of material from some celestial body and it went wrong? Well, I don't think we have to worry about Bug Eyed monsters from this space mission.

We had recorded a segment of this program wherein Pickles of the North had talked a bit about Halloween, or Samhain as some of our ancient ancestors had called it. Well, Windows 10 had burped a bit while I was editing this program for broadcast and patching Pickles' segment into the program file got undone. This segment can't just be put off to another program, so we're posting it here. Sorry, Pickles!