It's Monday, January 25, 2021, 18:50 and this Web page is finished. I've added some parts and I've replaced the one spinning Earth graphic with one that does not require a huge number of citations of authors. The original top of this page follows the arrow. ⇒We talked about these historical times. The president of the United States has been impeached for a second time. Insurrection is a topic all over the country, more such trouble as we saw on January 6th, maybe be in store. The Covid-19 pandemic continues to hit the United States particularly hard. Meanwhile we did do one science-related topic, and Pickles of the North read a piece that was designed to get us away from the death and mayhem we've had so much of lately. 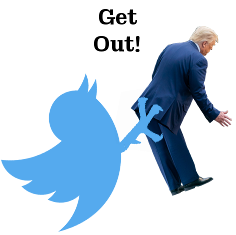 They Finally Got Rid of Him

Trump finally acknowledged that he's leaving the office of President of the United States this coming Wednesday. Well, he was leaving whether he liked it or not. I guess we won't be treated to the sight of him being removed from the White House in handcuffs by the Secret Service. I was half hoping that we would see that. It's better that he finally just leaves, however.

Trump has also been kicked off Twitter permanently. That may bother him even more than being kicked out of the White House. After all, he actually did stuff on Twitter, and he could post his bilge to millions of people around the world and he didn't have to see what they Tweeted back at him. Maybe he'll surface on one of the far right-wing social media sites. I'm sure that the slugs at Fox will have him on often. He'll certainly be in the news for being sued and maybe indicted for all sorts of crimes.

This is the final weekend of the Trump Presidency. He'll be gone for our next radio program, I'm very glad to say.

The United states keeps setting new record highs for the number of Covid-19 related deaths, one day topping the previous day's total. This accelerated death rate is, in my opinion, clearly result of the Xmas surge and the New Year's surge after that. So we have the second wave of the virus, plus the Thanksgiving surge, which I assume is mostly over with by now, and the Xmas and New Year's surges which are still putting more people in hospitals. I wonder if Trump's right-wing bund really and subsequent insurrection in the Capitol Building last week will be a super spreader event? People are being amazingly stupid. This is how diseases have historically spread through human populations. Long ago people didn't understand things like the germ theory of disease, nor were there things like organized medicine and modern medical technology. But in 2021, there is no excuse for large numbers of people behaving like this.

The disease vector in chief, Donnie Bonespur Trump pays no attention to this pandemic anymore, his failed warp speed rollout of the available vaccines is being exposed for another of his fake claims.

It now turns out that the reserve vaccine stockpiles that the White House was talking about do not in reality exist! Health and Human Services Secretary Alex Azar announced this week that the federal government would begin releasing Covid-1 vaccine doses held in reserve for second shots. Well, the reserve just isn't there. The Trump administration had distributed all available vaccine stores in December; they were taking what had been planned to be the second doses of the vaccine directly off the manufacturing line. Now with lots of people on the front lines at the state and local level preparing for massive vaccination programs they are discovering that there are no vaccines for them to administer. And some people may not get their second vaccination within the proper time limit. This is another terrible development and another terrible consequence of the incompetence and lack of caring of the Trump Administration.

In other medical news, this past week we learned that Dr. Harold Bornstein, personal physician to Donald Trump, has died. The rather wacky looking doctor had said in a letter in 2016, that If elected, Mr. Trump, I can state unequivocally, will be the healthiest individual ever elected to the presidency. In 2018, Dr. Bornstein revealed that Trump had actually written the letter himself and that the doctor had simply signed it.

It's being reported that the Earth's spin may be speeding up. It's nothing that a human being could notice, but a senior research scientist named Peter Whibberley who's with Britain's National Physical Laboratory said, It's quite possible that a negative leap second will be needed if Earth's rotation rate increases further. Leap seconds have been added now and again for decades to keep clocks up to date. Leap seconds have always been added to the length of a year. The last leap second was added at the end of 2016, and nobody knows when the next leap second will be added, or subtracted, from a year.

Pickles of the North read a piece about Freddie the butterfly and his time in Manitoba's Winter.