Here we are in mid-Winter with a big storm heading our way and a fierce pandemic threatening everyone. We talked about how Americans got so stupid, about the pandemic, about brutal homophobic punishments in Indonesia, and Pickles of the North talked about the Frost Fairs that used to be held on the frozen River Thames. I will probably update this Web page a little bit at some point.

The Trump Administration left with no plan for the distribution of the various vaccines. President Biden has made a bold claim that he's going to get 200,000,000 doses for Americans. How much further along would the vaccination program be if only Trump and his pals had behaved normally and planned out how to distribute the vaccines, and that plan ought to have included obtaining a lot of vaccine doses. Trump passed on an extra 100,000,000 doses at one point.

The more infectious and maybe more virulent South African variant of Covid-19 is in the United States, and Dr. Fauci says that the vaccines will need to be adjusted due to the mutations observed in the virus. He said that scientists, will have to be nimble to be able to just adjust readily to make versions of the vaccine that actually are specifically directed towards whatever mutation is actually traveling at any given time. This is how viruses behave. Well, I say behave, but of course a virus isn't really alive. It's just a bit of very complex organic chemistry. Parts assemble into a virus and the virus goes out into the world and does what it does. 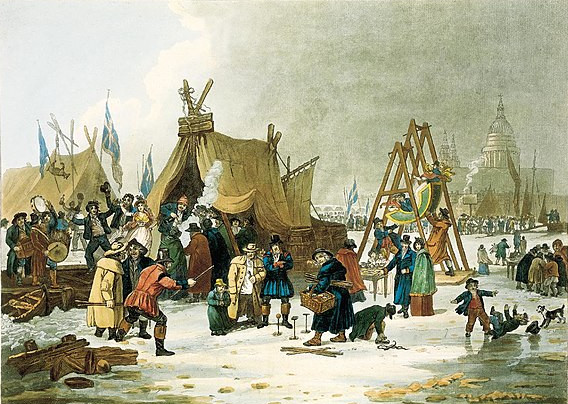 The Last Frost Fair on the Frozen Thames — 1814

Pickles of the North read a piece about the Frost Fairs that were held on the River Thames in London long ago when the river would freeze solid. The first one was held in the year 695 CE. The final one was held in 1814 CE.

They were actually rare events. Only abut 24 of them are known to have been held, but the Londoners had a great time when it was possible to hold one. The Thames tended to freeze over in colder times and this was aided by the river being broader and shallower, thus moving more slowly than it did after the Thames Embankment was constructed. Also, the old London Bridge, which was replaced in 1831, tended to catch flotsam that came down the river and that also helped to slow the water and let it freeze. Of course the Industrial Revolution and the subsequent global warming it has caused has undoubtedly played a role in ending the era when the Thames would freeze over to any appreciable thickness at London.

As illustrated in the accompanying image by painter Luke Clenell people brought just about everything down onto the ice during a Frost Fair. Clenell was in London on February 4, 1814, the date the picture is said to represent, and he probably painted what he saw. Barbers, amusement operators, taverns and bakeries, as well as some other establishments, got onto the ice where the people were, and apparently there was a sense of abandon when people were in the wide open, cold space of the frozen river. For some people, at least, the Frost Fair was the occasion for a real Bacchanal.