We covered the below topics and more on this program. Along with the usual Covid-19 statistics we talked about R. Paul getting his Covid-19 vaccination. We linked some analysis from Nazi Albert Speer to the Trump Presidency and the events of January 6, 2021. Pickles of the North read a piece about Valentine's Day. I do plan to update this Web page pretty soon.

The next WBAI LSB meeting is scheduled to be held on Wednesday, March 10, 2021, it will probably be held as a teleconference meeting, as the 11 previous public meetings were because of the pandemic.

We welcomed a new member who replaced a member who resigned from the LSB. We had a debate about the legally required report out about the executive session from last month. I maintained that this was a violation of the rules laid down in the Communications Act. Nothing that was actually confidential was discussed. The report out was required to be posted by January 27. So it was quite late no matter what. 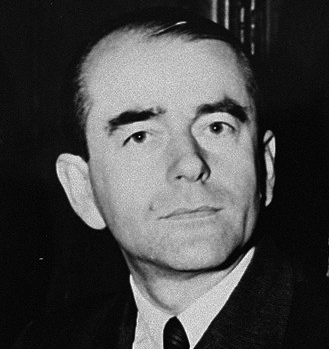 Albert Speer at His Nuremberg Trial in 1946

We talked about the trial of ex-President Donald J. Trump in the Senate. We read a small passage from the book Inside the Third Reich by Albert Speer. Speer was a close personal friend of Adolph Hitler. He ended up being the Minister of Armaments, among other duties, and he kept Nazi Germany organized when everyone else was goofing off or hiding.

The passage I read from Speer's book related to how people like Hitler could not trust the people they were supposed to be leading. I noted that this was because they had never been elected and did not think that the people would be behind them unless they bought those people off. Now Trump did get elected once, albeit with help from Russia and a crooked FBI Director, but I think that Trump was very surprised when he found himself winning the election in November 2016. I think that it completely floored him. He had, after all, only planned to use the campaign to promote a cable channel to be named after him. He knew that he had lost the popular vote in 2016. He saw that his poll numbers during his presidency were about the lowest of any president in the modern era. He knew that he had lost the popular vote again in the 2020, election and so he behaved as a dictator in trying to stop the vote count in Congress.

Yeah, Trump had his supporters but they were not the majority. He kept pumping up his ego with rallies of his supporters and he kept holding the rallies after he'd lost the election. He fits the pattern of a dictator who cannot trust the people because in this case he knows that he had outside help, and he lost the popular vote by a lot. But we're lucky that most of the American people, and so many people in various offices, prefer a Constitutional democracy as the model for their republic rather than a dictatorship.

Trump should go to prison, not just get found guilty of high crimes and misdemeanors by the Senate.

R. Paul got his Covid-19 vaccination this week! We talked about that, all right.

Pickles of the North read a piece about the origin of Valentine's Day. Yeah, it's a story of a crazy Roman Emperor, a suicidal Bishop, and anti-sex Catholic Church and superstitious nonsense.