It's Saturday afternoon, March 13, 2021, 14:57, and I have updated this Web page with the raw audio of the program. The program did not air, as you can see below. The original top of this page follows the arrow. ⇒ Here's some of what we talked about on this radio program. The Neanderthal and geomagnetic piece seems poignant to me. I really do hope that I can get around to updating this, and other, Web pages soon.

This Program Did Not Air on WBAI

The audio file had been received by the Operations person on duty and had been put into the rotation. At about five o'clock Saturday morning the host of the program that aired from 2 AM to 5 AM said that the computer was down and he didn't have the password for it.

Since we're pre-recording the program during this pandemic I have the raw audio for this program. It's a bit different from what would have aired. It's in mono, not stereo and since it's the raw audio it just has us talking. The music beds that had been mixed in to the program that had been prepared for air can't legally be played on my Web site. So you'll hear some short tones replacing the music.

This is the second time that Back of the Book has not been aired, even though the program was there, in the past four months. We await WBAI Management's determination regarding how it will not happen a third time.

The next WBAI LSB meeting is scheduled to be held on Wednesday, April 14, 2021, it will probably be held as a teleconference meeting, as the 15 previous public meetings were because of the pandemic.

The LSB spent quite a bit of time on a motion regarding something I can't talk about on the air or even on this Web site, for now. But you'll hear about it on the air at some point, just not from me - until later. 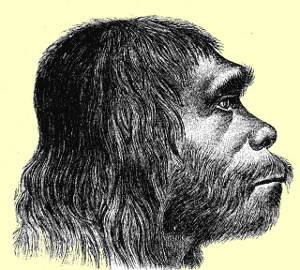 He Never Knew What Hit Him, Will We?

We talked about Neanderthals. We've seen a report that some scientists are thinking that the Neanderthals died out about 42,000 years ago during the Laschamp Event, as it's called. The Laschamp Event was a geomagnetic excursion. The Earth's magnetic poles flipped, but the flip failed and it didn't last. The Earth's magnetic field was in the throes of reversal for approximately 440 years, with the transition from the normal magnetic field lasting about 250 years. The reversed field was 75% weaker than what had been normal before the Laschamp Event, whereas the strength dropped to only 5% of the current strength during the transition. This would have let more cosmic rays hit the surface of the Earth and this caused climate change and the upper atmosphere ozone levels deceased allowing more intense UV to hit the Earth's surface. Scientists are studying a kauri tree uncovered in New Zealand for more evidence about this event. That kauri tree lived for almost 2,000 yeas and died during the reversal. The whole period is being called the Adams Event or the Adams Transitional Geomagnetic Event in honor of science fiction writer Douglass Adams. This whole event is also blamed for the disappearance of Australian megafauna. If the magnetic field weakness did indirectly kill them the Neanderthals could never have seen it coming. Were they somehow informed about it they could not have understood. Maybe this is something to keep in mind.

We talked about recent research that may indicate that Neanderthals could speak to each other.

We also talked about the South Atlantic anomaly. Satellites get killed by it. Space walks are not done when the space station's going over it.

The Earth's magnetic field has been weakening for about 200 years. Will it flip in another 150 years or so or is the next flip a very long time from now? 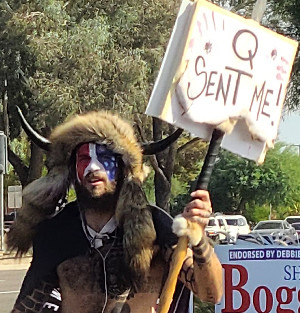 This Fool's Staying Locked Up

Arrests of the January 6, insurrectionists continue. On the previous program we talked about The Federal Bureau of Investigation arresting one Federico Klein, who was a Trump appointee to the State Department, on a charge of assaulting federal law enforcement personnel during the insurrection on January 6. In a further development this past week U.S. Magistrate Judge Zia Faruqui denied Klein the option to post bail and called his behavior on that day Extremely concerning. So that idiot is staying in jail.

That other high-profile insurrectionist idiot who was dressed up in horns and face paint and who called himself the QAnon Shaman, and whose real name is Jacob Chansley was also denied pre-trial release this past week.

Senior Judge Royce Lamberth wrote a 32-page opinion denying the motion by Chansley's defense counsel that Chansley be let out. The judge ruled that the QAnon nutcase's mother can't be relied upon to vouch for her son, who reportedly lives with her in Arizona, if Chansley is set free.

A good part of why Chansley's motion got dismissed by the judge is that Lamberth reportedly concluded from the currently streaming 60 Minutes+ interview that Chansley's claims that he participated in the insurrection at the Capitol that left five dead at the behest of then-President Trump indicates he might do something like that again if he's set free. The judge, who was appointed by Republican President Ronald Reagan, said that In his interview with 60 Minutes+, defendant stated that he does not regret his loyalty to former President Trump.

On his decision Judge Lamberth also wrote, Such media appearances are undoubtedly conducive to defense counsel's fame. But they are not at all conducive to an argument that the only way defense counsel could privately communicate with his client is if defendant were temporarily released. Given defense counsel's decision to use what could have been a confidential video conference as a media publicity stunt, that argument is so frivolous as to insult the court's intelligence. So that fool will also stay in jail until he's tried, and I hope he also gets the maximum sentence of something like 20 years or more in federal prison.