So we talked about finally getting a phone system that Verizon will not let go to hell so easily as they have allowed the copper-based system do over the past few years. It'll be good to not have to worry about the phone dying every time it rains. We also talked about that situation where there's a huge container ship stuck in the Suez Canal. We talked about a few other things as well. I really will try to get this Web page updated over the next couple of weeks.

The next WBAI LSB meeting is scheduled to be held on Wednesday, April 14, 2021, it will probably be held as a teleconference meeting, as the 12 previous public meetings were because of the pandemic.

The LSB spent quite a bit of time on a motion regarding something I can't talk about on the air or even on this Web site, for now. But you'll hear about it on the air at some point, just not from me - until later. 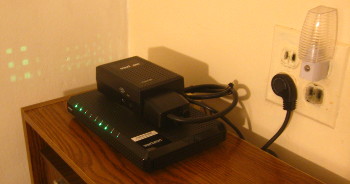 We have a telephone again! It's a fiber optic connection. Verizon sent us an E-mail that said that it's Fios Digital Voice that we now have. Really, it's just a fober optic connection. The Verizon installer came this past Thursday. It took about 2½ hours for him and a partner to install it. Now we have this device called an ONT, or Optical Network Terminal, sitting on a bookcase in the kitchen. It's not the busy looking thing I'd seen photographs of. And as you can see in the photograph we now pay for Verizon's electricity to run the phones.

The guy installing it was surprised that Verizon hadn't notified us a while ago that they were going to switch us to this setup so we could make arrangements. Instead Verizon just shut down our copper based land line on March 3rd! We complained about our phone being dead and got a trouble ticket from Verizon. And then they sent us an E-mail the next day that said, Your Verizon repair request, ticket #xxxx has been resolved. So right after that we contacted them again via chat within a day or so, due to their various departments shutting down, and got a new ticket. Within a few days we got notified via another E-mail that the new ticket had also been resolved! Only after I spent more time in Chat with a number of Verizon customer service people did I get told that they were no longer accepting complaints on our line problems, and that the only thing we could do was to let them install the fiber optic phone system. They had only just installed the fiber optic system in our building, so it was not an option before now.

One good thing about this new installation is that it's a part of Verizon's current business model. We can probably count on them doing something about it if something goes wrong with this setup, unlike when the copper-based land line got filled with water and they really did not want to be bothered with it. I think that the fiber optic cables are maintained better now than the ancient, copper cables were being maintained over the past few years. The copper cable feeding our apartment building was laid down about 90 years ago.

They only installed this fiber optic version of a land line on March 25. We are probably going to have to fight with them about the bill. We were without a phone for more than three weeks, and they said they were giving us a refund of $1.90. I spent quite a number of hours in chat and on the cell phone with Verizon people, some of whom just lied to me. Really, I'd like all of that time back. But I know that I'll probably have to spend more time dealing with the bill. 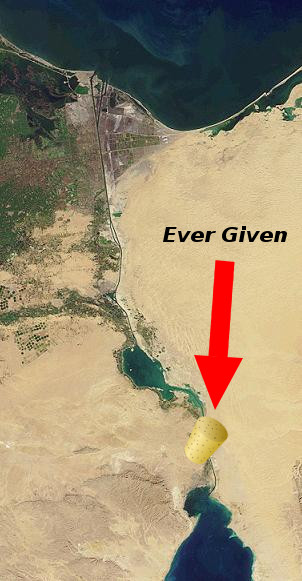 The container cargo ship the Ever Given, a Panama-flagged ship, is wedged across the Suez Canal and blocking traffic in both directions on the waterway.

This thing is huge and weighs a great deal. It is acting like a cork in the Suez Canal, blocking all other shipping from moving through it. Of course the Suez Cabal is a major waterway of the world, cutting travel times between Asia, the Indian Ocean and some parts of the South Pacifica to Europe and the east side of the Americas by quite a bit. There are at least 150 other ships stuck in the canal because there's no way to get past the blockage.

I've read that high winds and a sand storm pushed the ship into one bank of the canal. They are trying everything from bulldozers on the ground to large tug boats in the canal to push, pull or nudge this huge vessel into the channel so that it and the rest of the ships can resume moving through the canal.

I had thought that they'd get the thing out of there within a day or so, which would still have been quite a blow to the world economy. As we recorded the radio program the Ever Given had been stuck in the canal for three days. I've seen that Peter Berdowski, CEO of the Dutch company Boskalis, which is one of the companies trying to free the ship, told a Dutch television station that, We can't exclude it might take weeks, depending on the situation. Weeks!

Well, this added to the economic impact of the pandemic is going to make things worse. And, really, do they need ships that are so big that they can clog the Suez Canal and cause worldwide economic suffering? I think that greed has a lot to do with this. And I wonder how much stuff that's in those big containers that are baking in the Spring, Egyptian Sun is going to rot from the delay and the heat and all? Yeah, the graphic shows the position of the Ever Given in the canal, it's position is represented by a cork.