It's Monday morning, May 3, 2021, 08:51, and I have added the link to the official archive of this program. That official archive is truncated, but I am attempting to get that archive fixed. There are more updates to come for this Web page. The original top of this page follows the arrow. ⇒ We welcomed in the Middle Third of 2021, on this program. It should be a much better Middle Third than the 2020, version because we plan to actually get out into the nice weather for this year's Middle Third. We've both been vaccinated and with luck there will be no sudden, surprise variants to defeat our vaccinations. We also talked about Rudy Guiliani's legal troubles. Will we see him heading to Sing-Sing one day? We also talked about a truly stupid right-wing talking point that was based on a lie in a foreign newspaper. I hope to get this Web page finished pretty soon. Check back for updates.

The next WBAI LSB meeting is scheduled to be held on Wednesday, May 12, 2021, it will probably be held as a teleconference meeting, as the 16 previous public meetings were because of the pandemic.

The LSB again spent quite a bit of time on a motion that became two motions, sort of, regarding something I can't talk about on the air or even on this Web site, for now. But you'll hear about it on the air at some point, just not from me - until later. Have you visited the official Pacifica Web site lately? Ahem.

Rudy Giuliani may be cohabiting in the near future with some people whom he's met before. This past week Federal Marshals served search warrants on his Manhattan apartment and his law office. They're looking to nail him for being an unregistered agent for a foreign government. This relates to all of that nonsense that he and Trump were spouting about Hunter Biden during the last presidential campaign. He had a pair of henchpersons named Lev and Igor helping him out in that caper. So at 6 AM the Federal Marshals invaded Giuliani's place and seized lots of records, including a lot of electronic devices where records may be stored.

Giuliani is calling federal investigators jealous of his term as U.S. Attorney for the Southern District of New York in the '80s, and he says that's that's why they raided his home and office. It's a bit ironic that he's being raided by the same office he used to run. I remember his grand standing with Senator Amato from Long Island long ago when they would dress up as if they were in a motorcycle gang to get a photo-op standing in the rear of some law enforcement people who were actually doing a raid on some motorcycle gang or some such group. They really looked absurd and their self-aggrandizement motive was obvious.

Another Trump crony who's gotten records seized is one Allen Weisselberg, who handles Donald Trump's finances, and the finances of his various companies. Manhattan District Attorney Cy Vance Jr. recently used a grand jury subpoena to seize boxes of documents from Weisselberg's ex-daughter-in-law, you may remember that as we went to record a previous program we talked about her a little bit, and New York Attorney General Letitia James is doing a civil investigation into Trump's alleged asset inflation and deflation in order to get loans or breaks on his taxes, etc. This Weisselberg guy was also involved in the money side of the Trump University scam years ago. Weisselberg certainly doesn't have to worry about money for himself. He's admitted that his salary had been around $450,000 a year for a long time, he also received an annual bonus ranging anywhere from 200 (thousand dollars) to $400,000 a year.

Will this guy get a cell next to Rudy? Another Trump crony, Michael Cohen has said that Giuliani will "flip on Trump in a heartbeat."

And Rudy Giuliani's son is attacking everyone now. I remember him when he was an right year old brat at a press conference when Giuliani had won the race for Mayor of New York years ago. He was a real brat then, messing around with things and being a nuisance. Now he appears to be just louder than he was then. 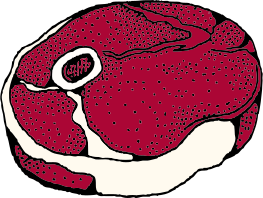 We talked about a stupid right-wing attack on the Biden Administration saying that President Biden is going to force Americans to eat not more than four pounds of meat a year. This nonsense stemmed from a British rag called The Daily Mail which came to the editorial conclusion that an academic study done in 2020, by people at the University of Michigan and Tulane University who had examined what would happen if people reduced their consumption of beef to four pounds per year. It had nothing to do with the Biden Administration. And all of these right wing creeps, including some state governors, were railing about it as if it were rooted in reality. The authors of the study even appeared on TV to debunk the right-wing assertions. Fox News even had to issue a correction to the statements made on their air over this. This is how the right-wing does things now.

Pickles of the North