Here we are, in the usual time slot, I hope. This Web page is pretty thin because I didn't have a lot of time to get ut posted. I'll be trying to update this Web page in the next few hours. Right now we just have a brief piece on the eclipse, there will be more to come.

The next WBAI LSB meeting is scheduled to be held on Wednesday, July 14, 2021, it will probably be held as a teleconference meeting, as the 16 previous public meetings were because of the pandemic.

The LSB meeting didn't have much drama this time, that was good. Ahem. 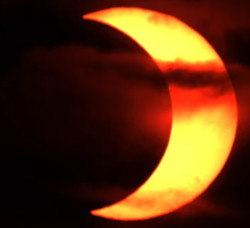 Pickles of the North and I warched the eclipse this past week. The Sun rose behind buildings, of course. We had to wait a while for it. It was almost six o'clock in the morning when we got to see the Sun at all. After it cleared the nearby buildings there were quite a lot of clouds to interfere with out view of it. As a result I've had to opt to post a photograph of the eclipse from NASA.

Pickles and I used out special eclipse glasses for viewing this event. I also took some photographs, but they just didn't come out worth looking at.

It was pretty nice to see what amounted to a partial eclipse for us. The Ring of Fire version of the annular eclipse happened before the Sun rose in Brooklyn.