It's Monday afternoon, July 12, 2021, 15:51, and I've updated this Web page with the news that the second attempt to hijack Pacifica by a referendum has failed. There will be more updates on that topic pretty soon. I have also put in the link to the archive of this radio program. The original top of this page follows the arrow. ⇒ A lot of this program was about an article that described microbes that may actually be 100,000,000 years old, or at least they've been living in a sediment layer that's that old. The article talked about the revivification of those microbes. We talked about other things as well, but I'm going to leave this page as it is right now. I will be updating this Web page within the next week. So check back for the updates.

The next WBAI LSB meeting is scheduled to be held on Wednesday, July 14, 2021, it will probably be held as a teleconference meeting, as the 19 previous public meetings were because of the pandemic.

The LSB meeting didn't have much drama this time, that was good. Ahem.

We spent quite a bit of time on this program talking about an article in the June 2021, issue of Scientific American.

The article is about scientists drilling cores from the marine sediments beneath the Pacific Gyre, also known as the Oceanic Pole of Inaccessibility. Quite a place.

Anyway, it's pretty dead there, except that the sediments pile up very slowly, at a rate of about one meter in a million years, because the area has so little life in it. The author of the article is Jennifer Frazer, a science journalist. She wrote of drill cores taken at the bottom of the Pacific Gyre that pulled up sediment that is 100,000,000 years old. And when scientists put some nutritious stuff in with that very old sediment the bacteria that were there ate and started to reproduce. Talk about suspended animation!

Since current technology doesn't allow the scientists to actually figure out how old an individual bacteria is they can only go by the age of the sediment where that organism is trapped. It's pointed out in the article that when those oldest bacteria were deposited on the bottom of the ocean plesiosaurs were swimming overhead.

One interesting note from the article is that a microbe called Chroococcidiopsis was found in the core sample. This particular creature is so robust that it is being considered for the role of terraforming the planet Mars!

July 12, 2021: As I was writing this update of this Web page the information came in that the attempt to hijack the Pacifica Foundation by a small group of well-funded people has failed, but just barely.

The referendum on the bylaws is over. It ended this past Wednesday night. I hope you all voted NO.

They slapped the gag order on after one of our programs, so we couldn't say anything about it. The people who want to hijack Pacifica were spreading lies a lot. They also did things like say that Jane Fonda had endorsed their hijacking attempt. Turns out that she didn't. They also lied by saying that Pacifica is selling the KPFT building to make money. But the reality is that the old KPFT building was in bad shape from neglect and from things like flooding of the premises that happened to it during the pandemic. 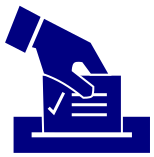 The Referendum Is Over

And in fact Pacifica is now caught up with its audits, something the attempted hijackers tried to ignore. Pacifica got its FY20 audit in to the California Attorney General's Office on June 30, which was the deadline. The audits had not been done on time for about nine years, but now they are. And some of the people who are trying to hijack Pacifica were a part of preventing audits from being done.

The final tally of this bylaws referendum is what some are calling a split decision. A majority of listener members voted in favor of it by 56% to 44% against, but a majority of Staff members voted against it by a vote of 58.6% against and 41.4% for.

The National Elections Supervisor wrote, The referendum did not pass as it failed to garner majority vote yes for staff and listener voters. As a result, the current bylaws stay in place.

We have heard that the hijackers have said that they were going to go to court to get the Staff votes annulled. Well, we'll see how that goes. Thanks for voting NO to all those who did so.

I'll be updating this page, and this item, more pretty soon.