Well, I'm rushing to get this Web page done. I fell asleep earlier. I'll be updating this Web page soon. So check back for the updates.

The next WBAI LSB meeting is scheduled to be held on Wednesday, October 18, 2021, it will probably be held as a teleconference meeting, as the 27 previous public meetings were because of the pandemic.

The LSB meeting was sort of the usual, WBAI Management couldn't do their reports in the allotted format and they were allowed to go back and forth. This may have lowered the number of questions they were asked.

They Didn't Kick it Very Far

So the Senate Democrats reached an agreement with the Senate Republicans on Thursday to have 10 Republican Senators vote with the Democrats to shut down Republican Senator Ted Cruz's filibuster. Cruz and some other farther right-wing Senators were trying to subvert Minority Leader Mitch McConnell's effort to just let the Democrats in the Senate pass the motion to lift the debt limit. Their weapon was the filibuster, something that came into being in the United States Senate after a rules change in 1806, but which was not the big thing it has become until the 1970s. In the current 100-member Senate it requires 60 votes to shut down a filibuster.

The deal with McConnell was that the Democrats would vote to raise the debt limit by about $480 billion, as opposed to an open-ended limit. Exactly what Cruz and the other obstructionist Republican Senators were planning to do if the motion to pass the bill were thwarted by their filibuster I don't know.

A failure to raise the debt limit would have resulted in the United States of America defaulting on all sort of financial obligations. It would have caused awful chaos in America and it would have instantly caused huge financial problems around the world.

It is being reported that former President Donnie Bonespur Trump attacked McConnell, for folding to the Democrats. Well, of course he wold say that. He has no concern for the billions of people whom it would adversely affect or even ruin financially. Trump doesn't understand the idea of trying to prevent the world from being destabilized.

The higher debt limit is what the Treasury Department has said that it needed in order to get all United States government debts paid until December 3. And then we'll probably go though all of this again. 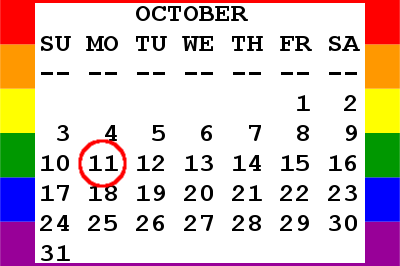 Monday is National Coming Out Day

So Monday is National Coming Out Day. It's on October 11, because that was the date of a march on Washington in 1987. I didn't go to that one. I was at the 1979, one. I was Sidney Smith that day. We talked about that on this program. At the 1979, march I saw bags of money being thrown around and I eventually reported on the money scandal for WBAI. Well, I came out a long time ago.

I talked about things done by the Gay Activists Alliance 50 years ago this October.