We talked about the below topics and more on this program. I have, I think, two more topics I want to post here and then this Web page will be finished. Check back for updates.

The next WBAI LSB meeting is scheduled to be held on Wednesday, December 8, 2021, it will be held as a teleconference meeting, as the 30 previous public meetings were because of the pandemic.

The WBAI LSB met on Monday, November 29, 2021. This was an executive session meeting, and so was closed to the public. This was also be the last meeting of the Eleventh WBAI LSB, although arguably the Delegates Assembly of December 8, will be the truly final meeting of the Eleventh WBAI LSB. The official report out of this meeting was, The WBAI LSB met in executive session to discuss personnel matters of a confidential nature.

Before the November 10, meeting I had put out a written Treasurer's Report for all to read.

Some years ago the WBAI LSB voted to hold its regular meetings on the second Wednesday of every month, subject to change by the LSB, with the vote to hold an executive session and a Delegates Assembly we have the following schedule:

The Delegates Assembly is set to begin at 7:00 PM. The new LSB has been re-scheduled for 8:00 PM. The Twelfth WBAI LSB will be seated at the LSB meeting on December 8, 2021. 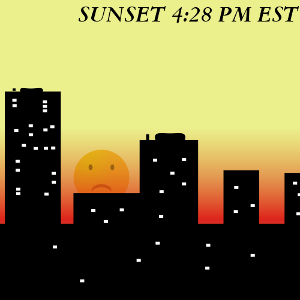 Earliest Sunsets of the Year

The Sun is now setting at 4:28 PM (ET). These are the earliest sunsets of the year in the Greater New York area. This deplorable condition will keep on going for about 10 days. I have always found these days when the Sun sets so early to be depressing. And the days when it sets at the earliest time of the year really point that up. The Winter Solstice will occur on December 21, at one minute to eleven o'clock in the morning. I have a Web page on this site that shows the dates and times of the seasons, and the sub-seasons.

According to the Johns-Hopkins Web site Covid-19 cases in the whole world reached 264,743,026 on Friday, and global deaths reached 5,240,971. In America the number of cases as of Friday was 48,918,222 and the death toll in America was 786,898, so 10,625 people have died of Covid-19 in America since our last program one week ago. That's a significant increase over the previous week's numbers. I wonder if lots of people traveling by air and going places and getting together for the Thanksgiving holiday had anything to do with that? This past Sunday a huge number of people in America traveled back from their holidays by air. Some of these family reunions may be the final ones for some participants.

The still new Omicron variant remains a bit of a mystery. We have read, by the way, that they didn't name it after the next letter in the Greek alphabet because they didn't want to confuse it with the English word new, which was one of my speculations on the last program. So this variant of concern, as the World Health Organization calls it, does seem to be even more transmissible than the Delta variant, which itself was described as even more infectious than chickenpox, to name a virus that is very infectious and is familiar to the general public. It's not yet clear if the Omicron variant can get around the current vaccines. It's possible that it may not have the devastating effects that Delta and previous variants have had, but these are still early days. The Omicron variant does seem to have become the dominant variant in southern Africa. Markets around the world are still volatile over this variant's effect on the world economy. The speculated effects on the economy are probably driving the markets down even more than what's realistically predicted, so far.

Another big deal right-wing evangelical Christian who proselytized against vaccines has died after being hospitalized with COVID. Marcus Lamb, founder and CEO of Daystar Television, was 64. Daystar is the second-largest Christian TV station in the world and they've used their broadcasts to tell people to not get the COVID-19 vaccines. Apparently this Daystar network reaches 2 billion people worldwide! At the start of the pandemic Marcus Lamb and his network preached about anti-vaccine conspiracies, they hosted a lot of interviews with anti-vaxxer cuckoos, and railed against the lockdowns that were designed to deal with the spread of the disease. Earlier this month the son, Jonathan Lamb, said about his father's battle with COVID-19, There's no doubt in my mind that this is a spiritual attack from the enemy. So he's as delusional as his father was. The son was also asking for prayers for his father's recovery. The Daystar network pushed so-called alternative treatments for COVID-19 including unproven treatments such as hydroxychloroquine rather than vaccination. Marcus Lamb's wife said that he reportedly tried some of those remedies but did not recover. What a surprise. 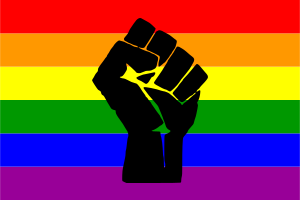 In some good news, Canada's House of Commons voted unanimously on Wednesday to ban so-called LGBT+∞ conversion therapy for minors. Canadian Prime Minister Justin Trudeau took to social media Wednesday afternoon to say, Good news! Today, Members of Parliament worked together to pass our government's legislation banning conversion therapy — and it is now headed to the Senate. We'll keep working to make sure this abhorrent and unacceptable practice is prohibited in Canada. Of course in America some places still endorse it, as the former Vice President Mike Pence did when he was Governor of Michigan and pushed for cutting funding earmarked for HIV/AIDS education and for giving that money to groups that actually practiced so-called conversion therapy instead. And it needs to be remembered that the Republican Party has adopted conversion therapy as a plank in their platform.

In some not at all good news the Moscow-based business newspaper Vedomosti Daily has reported that the Russian Interior Ministry is looking into a complaint against Netflix filed by Olga Baranets, the public commissioner for protecting families. Baranets is taking issue with how the platform is marking some of its LGBT+∞-themed content. According to current Russian laws, so-called deviant content should be marked with an 18+ rating, but according to the commissar, some titles from Netflix's colorful collection of films and TV series [that] tells about the lives of gays, lesbians, bisexuals and transgender people are being marked with a 16+ rating. What a bunch of ex-commie creeps. Russia's gay propaganda law even outlaws public discussions or positive messages about LGBT+∞ issues. Will Netflix cave on this issue?