We covered more on this program than the below stuff. We also talked about Mike Nesmith passing away, and we pitched. I really do plan to update this Web page soon. So maybe you could check back for all of that fun stuff.

The next WBAI LSB meeting is scheduled to be held on January 4, 2022, but it will be in executive session to discuss personnel matters, so you won't be able to hear it. The next WBAI LSB meeting that you will be able to hear the thrilling details of will be held on January 12, 2022, at 7 PM on ZOOM, even though ZOOM compromises privacy and security. We're supposed to elect WBAI's Directors to the Pacifica National Board at that meeting and we'll see what else comes up at it. These meetings will be held as teleconference meetings, as the 31 previous public meetings were because of the pandemic.

The WBAI LSB met on Wednesday, December 8, 2021, in an odd mix of the 11th and 12th LSBs. There was a Delegates Assembly meeting, and it happened right before the LSB meeting. A majority of the WBAI LSB had voted last month to hold the Delegates Assembly meeting before the LSB meeting in order to allow the members of the 11th WBAI LSB to vote on four amendments to the Pacifica Foundation bylaws that had been presented. I questioned why it had to be done this way. I said during the November meeting that this would put the legitimacy of those bylaws amendments in jeopardy because the time for the LSB meeting was the same as the time for this Delegates Assembly. The vote on handling the Delegates Assembly this way was 10 for, 3 against and 4 abstentions. I was one of those who voted No. The time for the start of the WBAI LSB meeting was changed by a couple of people to 7:30 PM and then to 8:00 PM. I think that we could have allowed the members of the 12th WBAI LSB, which consists mostly the same members as the 11th LSB, to vote on the bylaws amendments. I guess that the LSB members in favor of all of the bylaws amendments had counted votes and decided that they'd do better with the 11th LSB members than with the 12th LSB members. The bylaws needed to get 13 votes each to pass, and they got that. I voted for some of them, and I voted against some, and I abstained on one that I believed was out of order. Turns out the one bylaws amendment I'd said was out or order was indeed out of order, but maybe not for the reason that I'd cited.

So at the first meeting of the 12th WBAI LSB, which started seconds after the ending of the Delegates Assembly meeting, we elected the offers of the LSB for the next year. The Chair and Vice-Chair of the LSB will be elected via some company that will send out virtual ballots and count the votes. So it will be some weeks, I think, before we know who got elected to those offices. But no one contested the Secretary office, and so Mr. John Hoffman was elected Secretary by acclamation because no one else was nominated to run for that office. He's not a voting member of the LSB, but the bylaws allow for the offices of Secretary and Treasurer of the LSB to be held by people who are not voting members. And I got reelected Treasurer because I also ran unopposed.

Before the December 8, meeting I had put out a written Treasurer's Report for all to read. 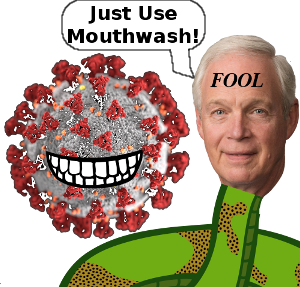 So another ignorant politician is shooting his mouth off about things he obviously has no understanding of at all. Senator Ron Johnson Republican from Wisconsin is getting plenty of press coverage over some stupid things he's been saying. This past Wednesday during a Town Hall discussion Senator Johnson said, Standard gargle, mouth wash, has been proven to kill the coronavirus, and, If you get it, you may reduce viral replication. Why not try all these things? Shades of Trump's question about maybe injecting people's lungs with bleach. Maybe if you shoot the mouth wash out through your nose that may help, but it sure wouldn't be a pleasant experience. But if the virus is in your saliva already it's too late to stop it. In that case you're infected. And viral replication takes place inside the living cells of your body, not in your mouth. Maybe the Senator was confusing bad breath with the deadly disease.

And of course a dose of alcohol will kill bacteria and tear apart viruses, and if it gets inside your cells it'll kill them too. Would Senator Johnson recommend that people use mouth wash to ward off or cure chickenpox, or measles or any other airborne viral disease?

The Johnson & Johnson company, no relation to the Senator, which produces one of the three main COVID-19 vaccines, says its Listerine Antiseptic Is not intended to prevent or treat COVID-19 and should be used to freshen breath.

In an effort to make himself look not quite so stupid Senator Johnson issued a statement that says he doesn't recommend mouth wash as an alternative to vaccination, but he hasn't been urging his constituents to get vaccinated against COVID-19 either.

Senator Johnson then started mocking infectious disease experts, calling them the COVID gods. His statement said that elected officials, not scientists, understand what best serves the public. What a jackass! He said, It's lunacy, Americans did not elect career government bureaucrats like Dr. Fauci, Dr. Walensky, and Dr. Collins to run our lives. We believe in individual rights. Yeah, let's not pay attention to the people who've spent a good portion of their lives learning about biology and medicine and who have a track record of understanding things like infectious diseases and how to fight them, let's let right-wing Republican politicians handle all of that. In fact, let's expand that idea. So the next time Senator Johnson needs major surgery he should get Mitch McConnell or another Republican Senator to cut him open and make the repairs.

Senator Johnson is also a conspiracy nut. He has suggested that fake Trump supporters were responsible in part for the January 6, insurrection. His past views on the COVID pandemic got his YouTube channel suspended in June.