This is a pretty thin Web page. I will do my best to add more to this page in future updates.

The next WBAI LSB meeting is scheduled to be held on January 4, 2022, but it will be in executive session to discuss personnel matters, so you won't be able to hear it. The next WBAI LSB meeting that you will be able to hear the thrilling details of will be held on January 12, 2022, at 7 PM on ZOOM, even though ZOOM compromises privacy and security. We're supposed to elect WBAI's Directors to the Pacifica National Board at that meeting and we'll see what else comes up at it. These meetings will be held as teleconference meetings, as the 31 previous public meetings were because of the pandemic.

The WBAI LSB met on Wednesday, December 8, 2021, in an odd mix of the 11th and 12th LSBs. There was a Delegates Assembly meeting, and it happened right before the LSB meeting. A majority of the WBAI LSB had voted last month to hold the Delegates Assembly meeting before the LSB meeting in order to allow the members of the 11th WBAI LSB to vote on four amendments to the Pacifica Foundation bylaws that had been presented. I questioned why it had to be done this way. I said during the November meeting that this would put the legitimacy of those bylaws amendments in jeopardy because the time for the LSB meeting was the same as the time for this Delegates Assembly. The vote on handling the Delegates Assembly this way was 10 for, 3 against and 4 abstentions. I was one of those who voted No. The time for the start of the WBAI LSB meeting was changed by a couple of people to 7:30 PM and then to 8:00 PM. I think that we could have allowed the members of the 12th WBAI LSB, which consists mostly the same members as the 11th LSB, to vote on the bylaws amendments. I guess that the LSB members in favor of all of the bylaws amendments had counted votes and decided that they'd do better with the 11th LSB members than with the 12th LSB members. The bylaws needed to get 13 votes each to pass, and they got that. I voted for some of them, and I voted against some, and I abstained on one that I believed was out of order. Turns out the one bylaws amendment I'd said was out or order was indeed out of order, but maybe not for the reason that I'd cited.

So at the first meeting of the 12th WBAI LSB, which started seconds after the ending of the Delegates Assembly meeting, we elected the offers of the LSB for the next year. The Chair and Vice-Chair of the LSB will be elected via some company that will send out virtual ballots and count the votes. So it will be some weeks, I think, before we know who got elected to those offices. But no one contested the Secretary office, and so Mr. John Hoffman was elected Secretary by acclamation because no one else was nominated to run for that office. He's not a voting member of the LSB, but the bylaws allow for the offices of Secretary and Treasurer of the LSB to be held by people who are not voting members. And I got reelected Treasurer because I also ran unopposed.

The results are in and these are the 2022, officers of the WBAI LSB:

Before the December 8, meeting I had put out a written Treasurer's Report for all to read. 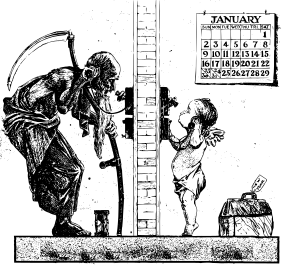 The major thing about this radio program was that it's occurring mere hours after the New Year has started. So Merry New Year to all of our listeners.

On this program Pickles of the North told about past practices from long ago regarding the celebration of the New Year.

R. Paul told the story of one New Year's Day in the 1950s, when a guy sicced a dog on him for the fun of it. Not the most pleasant holiday story.