So here's the Web page for this radio program. We covered the below topics and more on the air. Right now I'm falling asleep again. I figure that I'll really try hard to get this Web page updates in the near term, so check back for those updates.

Deaths Going Back Up!

According to the Johns-Hopkins Web site COVID-19 cases in the whole world reached 478,160,775 on Friday, and global deaths reached 6,112,880. In America the number of cases as of Friday was 79,911,690 and the death toll in America was 976,467, so 5,913 people have died of COVID-19 in America since our last program one week ago. This week's death rate is higher than last week's. I don't know if that means that the surge or whatever from the BA.2 sub-variant of the omicron variant is hitting us now. The pandemic is not over.

The United Kingdom's Office for National Statistics (ONS) said in a report that new COVID-19 infections continue to rise across England, Wales and Scotland, as the new BA.2 omicron variant shows that the pandemic is not over. In Scotland an estimated 9% of the population had COVID-19 in the week ending March 19. This is an all-time high, up from 7.1% the previous week, according to ONS figures. This is the highest figure since October 2020. Meanwhile in England, the rate of people who tested positive for COVID went from 4.9% to 6.4%, while in Wales it went from 4.1% last week to 6.4% this week. Yeah, not over. 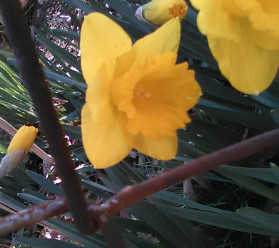 This was our first program after the Vernal Equinox which occurred last Sunday morning at 11:33 AM (ET). So we celebrated the new season as we always do, with a certain song from The Beatles.

At some point the weather will get warmer and actually stay that was for a while. But the sunsets are already getting late enough that some of us are feeling better about them.

Long ago farmers considered that there were really only two seasons, Winter and Summer. The farmer's Summer season went from the Vernal Equinox to the Autumnal Equinox. That's why they could consider the Summer Solstice t be mid-Summer. Well, we differentiate the seasons a bit more than the old farmers did. So we'll enjoy Spring before Summer actually gets there, and then we'll enjoy that, too.

Stephen Wilhite has died. He was the inventor of the GIF graphics file format in 1987. The idea behind the file format was to compress images so that they would move along the modems of the day at a faster rate. Back then some people still used acoustic 110 baud modems, I had a blazingly fast 300 baud modem then. At 300 baud when I downloaded a text file I could read the entire file as it went through the modem's buffer, which the software I was using to get on-line allowed me to see. Yes, my reading speed was faster than my download speed. I can't say that today. Mr. Wilhite worked at CompuServe, which was the first big social media platform. You had to dial directly into it. You attached a modem to your computer, usually by a RS-232-C cable and you were on-line. Since you were just using the ordinary phone line to connect to someplace this meant that for the entire time you were on-line you were tying up the regular phone line, something that neither my male ex nor Pickles of the North liked. So the GIF files (the letters GIF stand for Graphics Interchange Format) really helped what was called multimedia presentations in those days. This was years before Tim Berners-Lee invented the World Wide Web. There was a little controversy after a while caused by some people, mostly younger ones, insisting that the letter G always had to be pronounced as a hard G. I was working with some folks in 1989, including fellow WBAI producer Jim Freund, and we wanted to settle this dispute. So we called up CompuServe and spoke to the folks who'd created the GIF format. They confirmed that GIF was pronounced as jiff. Despite whatever the hard G people claimed the people who invented the format got to say how it was pronounced.

We really don't have modems as such anymore, even though they're called that, and there are a hell of a lot of image formats these days. I'm glad to say that I'm no longer bound to 300 baud for a connection speed.