So below are some of the topics we covered on this program. We did a poetry segment, which is rare for this program. I don't know how it might be received. We did more than what's below and I am planning on updating this and some other program Web pages over the next week or so. So check back and see if I actually get the updates posted this time.

The next WBAI LSB meeting that you can listen to and maybe even participate in will be held on Wednesday April 13, 2022, at 7 PM on ZOOM, even though ZOOM compromises privacy and security. This meeting will be held as a teleconference meeting, as the 34 previous public meetings were because of the pandemic. 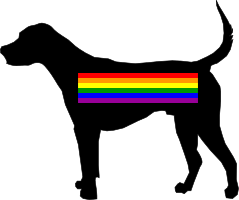 This is a gay dog story. In Stanly County, North Carolina a 4-year-old, 50-pound dog named Fezco was brought to the local Animal Protective Services facility by its owners. They didn't want the dog anymore. The reason was that they'd decided that the dog was homosexual after they saw it humping another male dog. Yeah, they didn't want to have a gay dog. So they threw him out of the house. What ignorance.

Well, this got some publicity and a gay couple from Indian Trail, North Carolina, Steve Nichols and John Winn, who've been together for over 30 years adopted the dog. They've renamed him Oscar, after Oscar Wilde, a famous Victorian poet and writer who was arrested on charges of sodomy and gross indecency in 1895. At his trial Oscar Wilde was grilled about the phrase The love that dare not speak its name. He was convicted and sentenced to two years' hard labor. Oscar the dog got off a lot better. Nichols and Winn, according to various news sources, said that when they heard the story, We looked at each other and said, We got to do something, We just thought it would make sense for the gay dog to be adopted by a loving gay family. We've been subject to that kind of bigotry and ignorance throughout our lives together, and we couldn't always do anything about it. Oscar, the dog had never been to a veterinarian, according to Nichols, and had heartworms. Oscar the dog is now being treated for heartworms. Mr. Nichols said the dog has, been through an awful lot, but we have high hopes, and the vet is very confident that he'll be able to pull through. Good luck, Oscar!

This Thing Is Still Killing People

According to the Johns-Hopkins Web site COVID-19 cases in the whole world reached 489,131,396 on Friday, and global deaths reached 6,145,883. In America the number of cases as of Friday was 80,117,294 and the death toll in America was 980,797, so 4,330 people have died of COVID-19 in America since our last program one week ago. This week's death rate is once again lower than last week's, and last week's was a bit of an uptick. The BA.2 sub-variant of the omicron variant is becoming the dominant variant of COVID-19 in America now. The pandemic is not over.

The World Health Organization has said that worldwide COVID-19 deaths increased by 40% last week as overall cases declined. Definitely not over 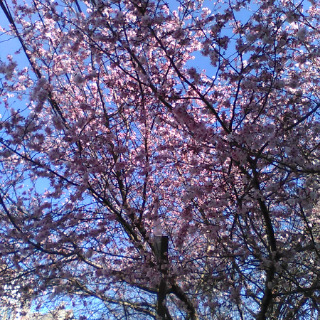 Loveliest of trees, the cherry now
Is hung with bloom along the bough,
And stands about the woodland ride
Wearing white for Eastertide.

Now, of my threescore years and ten,
Twenty will not come again,
And take from seventy springs a score,
It only leaves me fifty more.

And since to look at things in bloom
Fifty springs are little room,
About the woodlands I will go
To see the cherry hung with snow.

We don't usually do poetry on Back of the Book but I thought we'd try some out this time. This is a poem from A.E. Housman's book A Shropshire Lad which was published in 1896. I read the poem and I talked about it on the program. I also related it to a line in the song Darling Be Home Soon by The Lovin' Spoonful which was part of the soundtrack of the movie You're A Big Boy Now (1967). I've looked at the three-score ten concept from both sides now.