Here's the Web page for this program. I fell asleep in these wee ours, so there isn't much here yet. I do plan to post more on this Web page later on. So check back for updates.

The next WBAI LSB meeting that you can listen to and maybe even participate in will be held on Wednesday April 13, 2022, at 7 PM on ZOOM, even though ZOOM compromises privacy and security. This meeting will be held as a teleconference meeting, as the 34 previous public meetings were because of the pandemic.

Of Course It's Still Here

According to the Johns-Hopkins Web site COVID-19 cases in the whole world reached 496,909,990 on Friday, and global deaths reached 6,172,850. In America the number of cases as of Friday was 80,348,778 and the death toll in America was 984,934, so 4,137 people have died of COVID-19 in America since our last program one week ago. This week's death rate is very close to last week's. The BA.2 sub-variant of the omicron variant is still becoming the dominant variant of COVID-19 in America now. The pandemic is not over.

Pickles of the North gets her second booster shot later today. I'm seeing when I can get mine at the VA Hospital.

Meanwhile some people are behaving as if the pandemic actually is over. Congress is largely doing that. They having hearings without masks, they're gathering to celebrate the appointment of Ketanji Brown Jackson as an Associate Justice of the Supreme Court. They're doing their legislative business without masks and all. And now House Speaker Nancy Pelosi has tested positive for COVID-19 and so have Sen. Susan Collins, Sen. Raphael Warnock, Rep. Peter De Fazio, Commerce Secretary Gina Raimondo, Attorney General Merrick Garland, Assistant House Speaker Katherine Clark and Michael LaRosa, the spokesman for First Lady Jill Biden. The BA.2 sub-variant of omicron is expected to cause a spike in America soon. 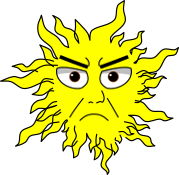 Pickles of the North called my attention to some alerts that on March 28th, the Sun experienced 17 or more solar flares and then on April 4th, the Sun had an X-class flare, that's the most intense kind of solar flare. And then there were two coronal mass ejections (CMEs) which came out of the Sun at about 2,000,000 mph. The second CME was going a bit faster than that and that one caught up with the first CME and they merged to form what some are calling a cannibal CME. So this thing was really powerful. And the whole thing headed directly toward Earth. It was predicted that the Aurora Borealis would be visible much farther south than usual, but when the big CME hit we in the New York metropolitan area were under a big storm cloud. Luckily, the big CME doesn't seem to have caused any real damage.

The current solar cycle is expected to peak some time in 2025. At that time the Sun's magnetic field will flip.

These solar events can cause a lot more than interesting colors in the sky at night. Geomagnetic storms from the Sun have caused problems in the past. In March 1989, a geomagnetic storm hit Canada and caused the Hydro-Quebec electrical grid to collapse. It even damaged a transformer in New Jersey. Millions of people in Canada lost their electrical power for hours. In such a situation radio communications of all sorts are also disrupted.

Solar flares happen all the time, although they aren't usually classified as X-class flares. There is evidence of a much bigger geomagnetic storm hitting the Earth on Sept. 1 and 2, 1859. Eventually, long after the event when scientists could come to understand what had happened, this was called the Carrington Event. It was named after one of the British astronomers who'd observed it. This was the first solar flare that scientists had observed. There was no radio then, and there wasn't a lot of electrical equipment in use in 1859, but the electric telegraph was in use by then, and those wires were stretched across thousands of miles of territory in a number of countries. Some telegraph operators reported receiving electrical shocks, some telegraph systems failed completely and some telegraph systems were able to operate without have their batteries attached. The aurora borealis for September 1/2, 1859, was seen as far south as Colombia, South America! Still, there was hardly any electrical equipment being used then, and no electronics were being used yet. A Carrington Event today would really make a mess of things. But there could be even worse. Examinations of Antarctic ice core samples have shown that there was an even bigger geomagnetic storm that occurred around the year 774, it's known as the Miyake Event. That solar flare produced the largest and fastest rise in carbon-14 ever recorded. If something like that hit us today I doubt that we'd be doing radio programs for a while afterwards, and those smart phones so many people carry would become paper weights.