This is getting posted later than usual. I'll fill it out more later on.

The next WBAI LSB meeting that you can listen to and maybe even participate in will be held on Wednesday July 13, 2022, at 7 PM on ZOOM, even though ZOOM compromises privacy and security. This meeting will be held as a teleconference meeting, as the 37 previous public meetings were because of the pandemic.

The WBAI LSB met on Wednesday, June 8, 2022. We finally got to those really, really important agenda items that some people have been pressing the LSB to deal with. They were not so important seeming when we got to hear what people wanted to say about them.

Before the June 8, meeting I had put out a written Treasurer's Report for all to read. 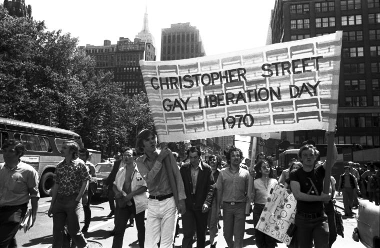 The Christopher Street Liberation Day March is tomorrow. As I said on the last program I am not going to this one. I am still concerned about getting COVID-19. Also I am probably not physically up to it. I haven't had a lot of exercise in the past 27 months. I hope to be in much better shape next year. I had missed only one march before the pandemic hit. That was, ironically, exactly 50 years ago, on June 25, 1972.

I will say again that I think it's wrong of heritage of Pride to ban the Gay Officers Action League from the march.

A Threat to New Yorkers

The Supreme Court finally published its ruling on New York's Sullivan Law that required that anyone who wants to get a concealed carry permit must prove to the state authorities that there is a real need for the person to carry a concealed firearm. Predictably the right-wing dominated Supreme Court ruled that the 111 year old law was unconstitutional. Now we'll have people getting permits to carry concealed guns on the basis of I want to. So the right wingers on the Supreme Court say that people who want a permit to carry a concealed gun should be able to get one on that basis and not on the basis of the government deciding that they really need one. The opposite of what they did with regard to Roe. This is very dangerous stuff, ordinary people will shoot each other much more often once this change in the law goes into effect. Stupid arguments will result in fatalities. Carrying a gun, with the power of life and death over others, is a hell of a responsibility. A lot of people won't guess what they might do until it happens. Momentary loss of impulse control will result in people dying. Not everyone can handle walking around with a gun. Will New York City become the wild, wild west? Maybe that was the intent of the right-wing crowd that has now ruled that in every encounter with a stranger that we have we'll need to assume that the stranger is carrying a gun.