Here is some of what we talked about on this radio program. Will Trump really get away with all of this criminal activity? At least some of his supporters who stormed the Capitol Building on January 6, 2021, are going to prison. We talked about the pandemic, of course, and we talked about the situation in Ukraine. As of the time of the posting of this Web page we still don't know what's going to happen with that nuclear reactor the Russians are controlling. Well, controlling militarily. We let everyone know that early Monday morning the northern hemisphere will enter later Summer. Yes, the Middle Third is slipping away. 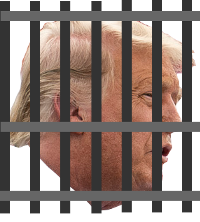 When Will They Lock Him Up?!

Since our last program Donnie Bonespur Trump had his place raised by the feds. He's now saying that it was all right for him to take that stuff home and keep it because he was just taking work home. A comedian retorted on-line that Trump doesn't have that job anymore, and he likened what Trump is trying to pull as if a babysitter is no longer employed to babysit a kid and then goes and picks the kid up from school and takes the kid home that's called kidnapping!

As we prepare this program for the air the Florida judge has not released anything from the affidavit that the FBI used to go get that stuff.

It was all in a basement that originally didn't even have a lock on it. Nuclear secrets and other things some of which are beyond Top Secret were there for anyone who wandered into that basement.

I wonder if Trump had had ideas about selling some of that stuff? I wonder if he let anyone from Russia in there? He might have had an idea to exchange it all for the peepee tape.

So he's really careful about keeping people from seeing his taxes, but nuclear secrets he doesn't consider that important.

Meanwhile a lot of those law and order Republicans are hollering to defund the FBI. And they're getting some of Trump's base all riled up. One guy tried to storm an FBI field office and ended up getting killed, and a moron from Pennsylvania who had threatened to kill as many FBI agents as he could on a right-wing social media site named Gab has been charged with influencing, impeding or retaliating against federal law enforcement officers after he made his public threats.

Don't Turn Your Back On It!

According to the Johns-Hopkins Web site COVID-19 cases in the whole world reached 594,742,658 on Friday, and global deaths reached 6,450,149. In America the number of cases as of Friday was 93,478,918 and the death toll in America was 1,040,126, so 6,705 people have died of COVID-19 in America since our last program two weeks ago. That averages out to 3,353 per week, which is a slower death rate than we'd had for the previous weeks. The pandemic is not over, even though a lot of people are behaving as if it were, including the CDC.

The CDC is saying that they screwed up the response to the pandemic. I think they're screwing it up now. It's still going on. The buses say masks required but most people are not wearing masks and the bus drivers don't always wear masks.

And this thing with monkeypox, I think that it's been allowed to get so far because it is perceived as being a problem affecting only gay men. This reminds me of how AIDS was treated. In the case of monkeypox they have a vaccine, they really need to get that to people to prevent the spread of this thing.

Another One Locked Up

We talked about this Guy Reffitt of Texas who went to the U.S. Capitol on January 6, 2021, with a holstered handgun, helmet, zip-tie handcuffs and body armor in an attempt to prevent the counting of the ballots in the 2020, presidential election. Reffitt was found guilty in March of five criminal counts, including obstructing Congress' counting of the Electoral College votes that officially gave Joe Biden the win in the election. He got an 87-month sentence, more than seven years. It's the longest sentence any of the insurrectionists have gotten so far, but it's less than half what prosecutors had wanted for him. Assistant U.S. Attorney Jeffrey Nestler told the judge, He wanted to physically and literally remove Congress. We do believe that he is a domestic terrorist. Reffitt was a member of the far-right militia group the Three Percenters and he reportedly told fellow militia group members that he planned to drag House Speaker Nancy Pelosi out of the Capitol building by her ankles, with her head hitting every step on the way down, according to a court filing.

This is the moron who told his son and daughter that they would be traitors if they reported him to the authorities. Reffitt warned his own kids that traitors get shot. His 19-year-old son, Jackson testified against him in court.

Mid-Summer ends and late Summer begins on Monday, August 22, at 6:33 AM (ET). I have a Web page showing the seasons and sub-seasons here.

They Continue to Strike Back

We talked about the Russian invasion of Ukraine. The Russian Saki base on the Black Sea experienced some explosions within the last fortnight. The Russian military said that some munitions had blown up, but a lot of people suspected that long range rockets fired by the Ukrainian military had hit the base in Crimea and that war planes were blown up. There was another story some days later that may throw some light on all of this. There are Ukrainians still in the occupied eastern section of their country who are apparently using plastic aeroplanes as drones and either dropping small bombs from them or attaching small bombs to them and flying them into targets.

And now a nuclear plant is in play. The last we heard before we recorded this radio program was that the Russian occupying force told all of the workers at the nuclear plant to not come in to work tomorrow. What might the authors of the Chernobyl nuclear disaster have planned?