According to the Johns-Hopkins Web site COVID-19 cases in the whole world reached 603,371,012 on Friday, and global deaths reached 6,492,263. In America the number of cases as of Friday was 94,710,239 and the death toll in America was 1,047,380, so 3,694 people have died of COVID-19 in America since our last program one week ago. That's somewhat higher than the death rate for the previous week. People keep saying that the rates are going down, but we're still seeing steady of rising weekly death rates from COVID-19 in America. The pandemic is not over, even though a lot of people are behaving as if it were, including the CDC. Keep your masks on.

The Daily News is reporting that an unidentified, mystery respiratory ailment has killed three people at a private clinic about 800 miles from the Argentina's capital of Buenos Aires. It's doing the same thing to people's lungs that COVID does. But the total of nine patients infected have not tested positive for the novel coronavirus SARS-CoV-2, nor for influenza, the Hantavirus nor for any of the more than two dozen other pathogens that doctors in Argentina have been testing for. People who are getting this disease are getting bilateral pneumonia, which means that both their lungs are affected. Besides the patients eight medical personnel have caught the disease. Doctors are desperately searching for the cause of this serious illness. We wish those doctors, and the patients, luck, and let's hope this deadly disease doesn't get out to the rest of the world. 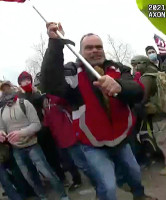 We talked about President Biden's speech that he gave on Thursday night. At last he's going on the attack against Trump and his MAGA crowd that really does want to destroy democracy in America. Biden also referenced what he's calling the MAGA Republicans, who go along with Trump's anti-American crap in order to get elected by the extremely stupid people who follow Trump's often deranged statements, and who attacked the Capitol on January 6, 2021, in an effort to overturn the 2020, presidential election. Biden didn't name Lindsay Graham, but he did reference elected Republican officials who threaten violence in the streets if Trump finally gets indicted for his crimes. Yeah, things are heating up.

Speaking of the January 6, insurrection a retired New York City cop named Thomas Webster, who was convicted of attacking a U.S. Capitol cop as a part of the insurrection in 2021, has been sentenced to 10 years in prison. This is the longest sentence for one of the insurrectionists yet. This is good. Too many of them have been getting tiny sentences when they should all be facing decades in a federal prison for what they did and what they'd intended to do. In addition, Webster, who'd been on the NYPD for 20 years before he retired, reportedly was also sentenced to three years of supervised release after his time is done. Jeez, this character must have been one awful cop. So far close to 250 of the insurrectionists have been sentenced for their parts in the riots.