We talked about black holes again on this program. We also had a little celebration of Pickles of the North's birthday. We talked about the crazy stuff swirling around Donnie Bonespur Trump. Pickles of the North told us about the latest development with the Orion spacecraft coming back to Earth, and of course we talked a little bit about the current state of the pandemic. I plan to update this Web page soon, so check back for the updates.

The WBAI LSB will meet in executive session on December 7, 2022. The next regular LSB meeting will be held on Wednesday December 14, 2022, at 7:00 PM on ZOOM, even though ZOOM compromises privacy and security. This meeting will be held as a teleconference meeting, as the 40 previous public meetings were because of the pandemic.

The WBAI LSB met on Wednesday, November 9, 2022. The LSB passed a motion that listeners can contact the LSB; I'm not sure how that's going to work out. And Management was told to set up a phone number to call the LSB; I don't think that's going to happen. The LSB was also presented with an impossibly complicated motion, which may be out of order. I got it postponed till we can find out if it's even in order. People just throw in every bit of language they can think of sometimes and call it a motion. And once again certain LSB members showed that they are hardly familiar with WBAI at all. They should know more about this radio station than just what's on the air.

Before the November 9, meeting I had put out a written Treasurer's Report for all to read.

According to the Johns-Hopkins Web site COVID-19 cases in the whole world reached 644,620,422 on Friday, and global deaths reached 6,639,588. In America the number of cases as of Friday was 98,937,121 and the death toll in America was 1,081,285, so 2,103 people have died of COVID-19 in America since our last program which is a couple of hundred less than the previous weekly death toll. The pandemic is not over. Pickles of the North and I are still keeping our masks on. We've both gotten out bivalent vaccinations, so we should have maximum immunity against the currently dominant variants. We're really in the season now where a surge is possible with people meeting indoors for hours at a time. 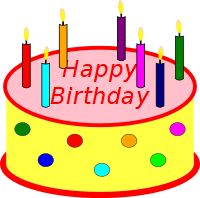 Merry Birthday to Pickles of the North!

On this program we wished Pickles of the North a Merry Birthday! 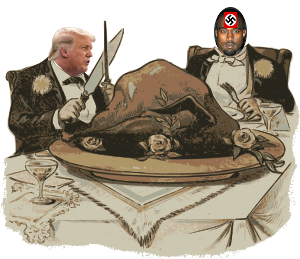 Nick's Under the Table

More information has come out about that little dindin that Trump had with that other moron Kanye West at his Mar-A-Lago joint. Kanye West brought along another moron, this Nick Fuentes creep. How stupid is Kanye West? Doesn't he understand what a white supremacist is? West said on social media that Trump was really impressed by Fuentes who has suggested Just send the military in, Do what must be done. Send the military into these Black neighborhoods. They're never gonna vote for us. Trump is not pleased at being tagged with Fuentes, although he did invite West. Trump is claiming West showed up with other people whom Trump hadn't known about. Really? The Secret Service let them in without having been looked at?

Trump is now saying that Kanye West tried to sabotage him by bringing the undeniably anti-Semitic Nick Fuentes to Trump's Florida estate for dinner last week, and then then making details of that visit public. What a surprise.

After West said weeks ago that he was going to go Death con 3 on Jewish people. (Yes, apparently Kanye West doesn't know that the term would be def con as in Defense Condition. This is the kind of mistake that semi-literates make when they mis-hear something and never read the word in print.) Leon Skum, aka Elon Musk, let him back on Twitter after that little comment. Well, that didn't last long. This week Kanye West posted a graphic that was too much even for Leon Skum, and he's once again banned from Twitter for promoting violence.

The CEO of the Anti-Defamation League has called Kenye West a vicious antisemite for his recent comments and behavior.

And West has been blabbing on various right-wing media outlets and is now quoted as having said on that other moron Alex Jones' podcast that, I'm not trying to be shocking. I like Hitler. Then he said, the Holocaust is not what happened. Let's look at the facts of that. Hitler has a lot of redeeming qualities. Jones, who's currently trying to worm out of paying for his years of lies by declaring bankruptcy, actually had to start trying to distance himself from some of Kanye West's crazy remarks. On this program Kanye West said of the Nazis, they did good things, too. We've got to stop dissing the Nazis all the time. West continued, There's a lot of things that I love about Hitler. A lot of things.

And of course Kanye West has announced that he, as well as Trump, is running for President in 2024. He's apparently added this Nick Fuentes character to his election team. If someone had written a comedy routine with all of this in it years ago no one would have considered it plausible enough to be funny.

Meanwhile the 11th Circuit Court of Appeals in Atlanta has shot down that special master that Trump had wanted appointed to run interference a against the Justice Department's investigation of his playing games with all of that top secret stuff he'd stolen from the White House. The appellate judges wrote. The law is clear, We cannot write a rule that allows any subject of a search warrant to block government investigations after the execution of the warrant. Nor can we write a rule that allows only former presidents to do so. Two of the three judges on that panel had been appointed by Trump and the other had been appointed by the first President Bush. Trump's pet federal judge Aileen Cannon had done what Trump had wanted her to do. The federal appeals court wrote in its decision, The district court improperly exercised equitable jurisdiction in this case. For that reason, we vacate the September 5 order on appeal and remand with instructions for the district court to dismiss the underlying civil action.