Web links related to the Back of the Book program of March 24, 2008


It's Saturday morning, April 5, 2008 11:56, and I've updated this page with the latest announcement of when the WBAI election results will be certified, and some information from Pickles of the North about that BudBurst project we covered on the air. Spring is here! And a hopping oyster to all who care. I'm told that I'll have to wait a month to wish everyone a merry underpass. We plan to talk about the below stuff and more on tonight's radio program, we also plan to get through all of the mail tonight. I'm sure we'll talk a bit about ex-Governor Eliot Spitzer, among other things.

UPDATE as of Saturday, April 5, 2008: The balloting in the 2007, WBAI elections is over at last. The surviving Elections Supervisor has counted the ballots. Here is his latest E-mail on the subject.

There's a regular LSB meeting scheduled for March 25th at 7:00 PM, in the Bread and Roses Art Gallery of Local 1199, at 310 West 43rd St. between 8th & 9th Avenues, in Manhattan. The ballots may not be counted until March 31, so this LSB meeting will consist of the same bunch of holdovers.

WBAI has an official Web stream of what's on the air at any time! You can go here and pick which type of stream you want! If this stream isn't working let me know. It was working all right at 9:03 PM last night. 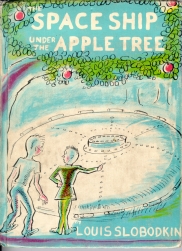 Our friend Seth gave me a book a while ago. It's the first book I ever got out of the library, and the first non-text book that I ever read.

I'd mentioned the book on the air at some point and Seth was able to find a copy of it somewhere. Thank you Seth!

The book is The Spaceship Under the Apple Tree by Louis Slobodkin.

I must say that I read it a bit faster this time than I'd been able to on the first try. When I was 6, or 6½ as I would have put it then, it took me 2 or 3 days at least to read it. This time it took me about an hour and fifty minutes, including a bathroom break part way through it.

I'd expected a little nostalgia trip with this book, but what I got right away was rather a surprise. The viewpoint character of this book is an 11½ year old boy named Eddie Blow who is into science and lives in New York City! There are some amazing parallels in this character to me.

So it raises the question: did this book have a huge influence on me and my life or did a canny Brooklyn Public Library librarian figure that this was just the book for a precocious 6 year old?

In fact I was technically too young to get my first library card, which is what I'd gotten that very day. But if you were 6 and accompanied by your parent you could sort of try out for one. The librarians would consider making an exception in some cases if they thought you could handle it. They would require you to know the rules of the library before they'd issue you the library card, which would actually bind your parent to being responsible for the books. So the librarian gave me a card with the rules of the library written on it to read and she walked away. I read it and memorized the rules in nothing flat. On the advice of my mother I didn't tell them I was ready for their little test right away, she had me pretend to keep on studying the card full of rules for a while. Of course I passed the test very easily, being able to recite back all of the rules exactly as they were written down. Hell, I was in Catholic School, rapid memorization of rules was already an adaptive skill I'd had to learn.

So I guess I have to consider the possibility that this little book influenced me for the rest of my life. Good grief.

We frequently talk about astronomical subjects on this program, and a lot of the most exciting topics in that area tend to concern events that we can only read about because only scientists with sophisticated equipment can see them.

Well, this past week a cosmic event happened that could actually have allowed a person to witness an explosion that happened about 7 billion years ago, around half the age of the universe.

A gamma ray burst is a phenomenon that is usually caused by some huge, explosive event. Scientists have been studying gamma ray bursts intently for a couple of decades because they were such an unexpected event when they were first observed. There are now observation satellites and ground networks dedicated to discovering and recording these explosive events.

This past Wednesday morning if you happened to be looking at the constellation Bootës you might have seen a faint dot of light show up and then fade away within a minute or so. If you had seen it you would have been looking at light that had been traveling since long before the Sun and the Earth had come into being.

If you somehow missed this event, no problem, it has been recorded here.

Science fiction author Arthur C. Clarke died this past week. Pickles of the North will talk about his life and works.

Here is a Web site for a project, called BudBurst, that helps ordinary people and especially kids contribute scientific information to keep track of the effect of global warming on plants blooming where they live.

We've been reporting recently on censorship issues relating to the governments of some countries blocking access to YouTube within their borders, and sometimes blocking access to that Web site for the entire world. Well, This week China has been blocking everyone in China from seeing anything on YouTube because videos have been posted there which show the protests in tibet and the sometimes deadly Chinese Government's reaction to them. I guess you can really tell what medium is in the lead for getting attention worldwide by seeing who's cracking down in them. At this time YouTube must be in that lead.

Speaking of things on YouTube that some people might want to censor we present here a recent performance by Pickles of the North's father at his 53rd annual St. Patrick's Day amateur theatrical event.