It's Sunday evening, March 4, 2012, 19:14, and I've updated this Web page with the list of program Web pages of the past that I've updated since the last program. The original top of this page follows the arrow. ⇒ Well, we're back from our little hiatus. We'll try to cover a bunch of topics on this program as well as dig into the mail backlog. We're also updating old Web pages lately. So check back for the updates to this one!

The next regular WBAI LSB meeting will be held on Wednesday, March 14th, 2012, at the “Brooklyn Commons” 388 Atlantic Avenue, 2nd floor between Hoyt & Bond Streets in Brooklyn.

WBAI has an official Web stream of what's on the air at any time! You can go here and pick which type of stream you want! If this stream isn't working let me know. And you can see the status of the streams at any time by clicking here. The stream was working at 02:47 this morning. The station has a Flash stream here, make sure you enable Javascript so it can work for you. 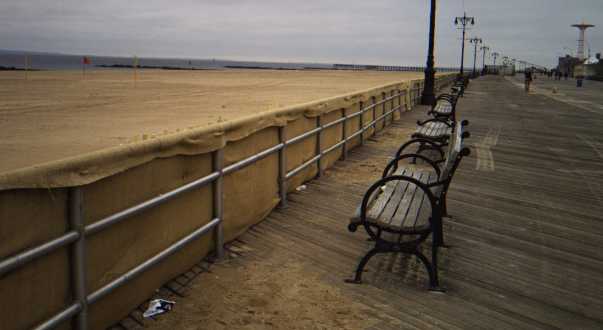 Burlap along the railing around the Coney Island beach

Hello! Pickles of the North here. This is a picture I took Friday morning on the Coney Island boardwalk. It was a blustery morning that only got colder as the day wore on. The burlap and picket fencing wasn't up last December when R.Paul and I last visited the beach. We figure it was put there to keep the sand from blowing up onto the boardwalk. The dunes on the the walk were much smaller, so I guess it's been working.

Even on such a gray morning there were people strolling, jogging and pushing babies in strollers. And there were workers at many of the boardwalk concessions and the two amusement parks, getting things ready for the spring opening of Coney Island in April. There were also at least three people feeding the gulls, so there was a lot of noise and movement on the otherwise deserted beach. I really love the beach in wintertime, but I must admit I was missing R.Paul, who wasn't feeling tippy top and so wasn't with me on this outing. But we'll be back there together soon!

It's late Winter. Daylight Saving Time will resume next weekend, at 2:00 AM on Sunday, March 11, 2012. At that point the Sun will set an hour later than it has been. The Vernal Equinox will occur on Tuesday March 20, 2012, at 1:14 AM (ET). So not only will the Sun set later, but the days will be longer than the nights. Oh, I am looking forward to that! More about the season dates here.

This one has the following potentially troubling section: “Every station will engage in social networking training for all programmers (in most cases this is available via volunteer trainers as NY has already found). This should be required to maintain an on-air Pacifica presence. Programming played on the full-power stations will be required to maintain either a Facebook page or web-blog, announce programs via Twitter, and post audio archives with Google tag words. As station websites are redone to work better, programmer content will be integrated directly onto station websites.”

Jeez, I've been avoiding making being a part of that Zuckerberg guy's operation for quite a while now. I don't feel the need to make him even richer by participating. Facebook is about getting the users' personal information and selling it to companies for the purpose of spamming them with targeted messages. Mark Zuckerberg's company makes Facebook users into spam bait in a barrel. Does the Pacifica Foundation really want to do this?

Over the weeks since the last program I've updated some of the older program Web pages. Here's the list of those updated Web pages: