It's Tuesday morning, September 17, 2013, 05:14, and because the stream crashed during the first half of this program, and the archive of this program is fragmented, and some of it isn't on the server anymore, I have posted a full archive of the program which I link to below. Previously I'd added the segment about the cricket we recorded during our recent trip to Coney Island. We did get to a bunch of the mail on this program. The original top of this page follows the arrow. ⇒ We are doing a two hour radio program this time! We'll talk about that on this program too. We also plan to talk about the current upheaval at WBAI. We will talk about various other things while we're at it and get to the below topics as best we can. We will also dive into our mailbag and get some of that done too. We might even get all caught up with our mail at last. We are in the process of updating this Web page.

The next regular WBAI LSB meeting is scheduled to happen on Wednesday, September 11, 2013, at 7:00 PM at Alwan-for-the-arts, 16 Beaver Street, 4th floor, in downtown Manhattan.

The LSB mostly heard reports from the General Manager and interim Program Director on the state of some things, and then LSB went into executive session for a while. The faction tried to shove one of their long motions that the rest of us didn't get to look at before it was put on the floor. This time they were stopped. It's a trick they use all the time, giving people mere minutes to try and digest some multi-page motion that they've worked on for weeks. The official report out of that executive session is that, “The WBAI LSB met in executive session to discuss personnel issues.”

We'll be talking about the layoffs that have happened and the program changes that have occurred and will be coming on this program. We don't have any special knowledge of the future program changes, but we can talk about what we do know. Many of the callers to the Report to the Listener that aired on August 9, were totally uninformed about WBAI's serious financial problems. I think that the listeners to Back of the Book must be a lot more knowledgable about all of this than the average WBAI daytime listener. 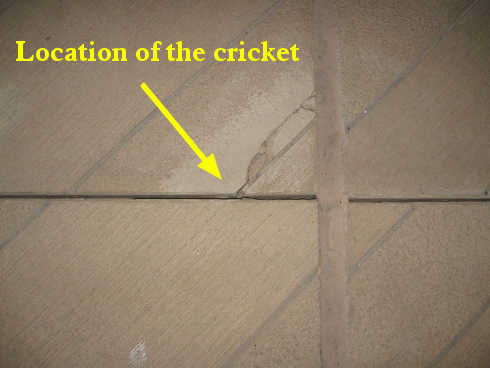 The cricket was in this crack

Below is an excerpt of the cricket sound I recorded.

So on this program we talked a tiny bit about our Coney Island trip on August 15. It was good to get down there the day after the LSB meeting.

After we sat on a bench for a while listening to the cricket I got up and started hunting it down. After a while I found that the sound of the cricket was coming from a crack in the concrete Boardwalk!

There is a move to concretize the entire Coney Island Boardwalk. This program has already been carried out at the eastern and western ends of the Boardwalk. It was considered a big compromise to allow the part of the Boardwalk around the amusement area to keep actual wooden boards as the surface that you walk on. The concrete has been decaying since soon after they poured it. Here we found an instance of the local wildlife taking up residence in one of the cracks.

So I stooped down and held my little digital sound recorder close to the crack and recorded some cricket sounds.

It was getting late, the Sun had just set and that part of the Boardwalk was becoming popular. All sorts of people were congregating, running, biking and talking loudly down there. You could hear some of that in the audio that I played on the air. Yeah, urban crickets often don't get to sing their Summer songs solo. The audio excerpt on this page is pretty much pure cricket.

So I finally joined Twitter. I did it last Sunday night.

Pacifica has been pushing all producers to join both Twitter and Facebook. I think that Twitter is the lesser of two evils. I will, however, look into seeing if I can get a Facebook page without having to become one of the suckers that's making Mark Zuckerberg a billionaire by lavishing their personal details on his site so that he can sell their information for even more money.

So far, it really looks like a big waste of time. If anyone wants to “follow” me on Twitter you can click on this little graphic and do so  . But remember, I warned you about wasting time on it.

If you do decide to “follow” me I will try to avoid doing too much of the stuff I see up there where people think that every little thing they do is worthy of pointing out to people. Maybe I just don't crave attention enough to rally fit in with this Twitter thing. I do not feel bad about that. 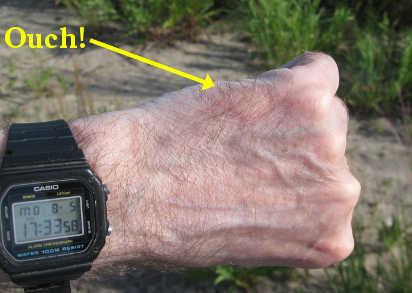 Now That is a Bite!

How did R. Paul get bitten and where did it happen? We'll try to get to that stirring topic on this program. At least you can tell when it happened.