It's Saturday morning, July 12, 2014, 07:25, and I've updated this Web page with a couple of things, including a bit about the snail mail situation at WBAI, which we'd talked about on the air, previously I'd added a little more about our Great Northern Trip. More updates to come. The original top of this page follows the arrow. ⇒ We are going to be wending our way through the throngs of drunks celebrating the Fourth of July weekend in order to get to this program. We hope that the fireworks don't get too intense. We plan to get through a bunch of stuff on this program, check back for updates.

More arguing over the hardly readable 46 page “melding” of every one of the “sustainability plans,” and their “notated,” bloviations. 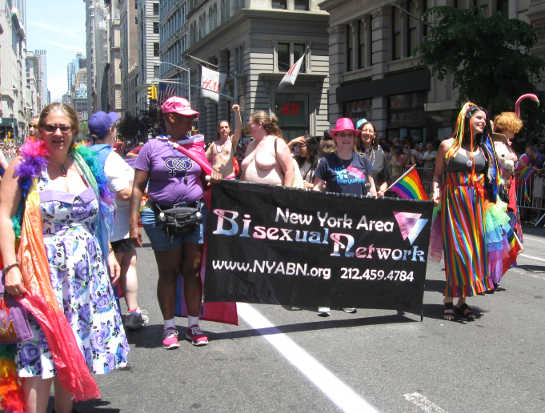 The 2014, Christopher St. Liberation Day March was held this past fortnight. Of course Pickles of the North and I were there. We plan to talk about it on this program. 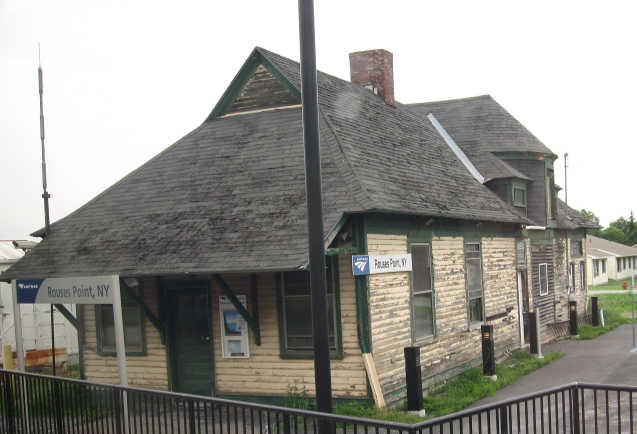 We talked about our great northern trip, which kept us out of the city for the last program. Oh, I wish I had decent photographs of all that, but my crummy camera and I just didn't get many photographs that were viewable. Above is one of the better photographs I got on this trip. It's of the border crossing, where they sometimes remove people from the train, and where they have in the past harassed Pickles of the North. We both just sailed right through it with no problems this time.

One of these days I may write up a Web page about this entire trip. 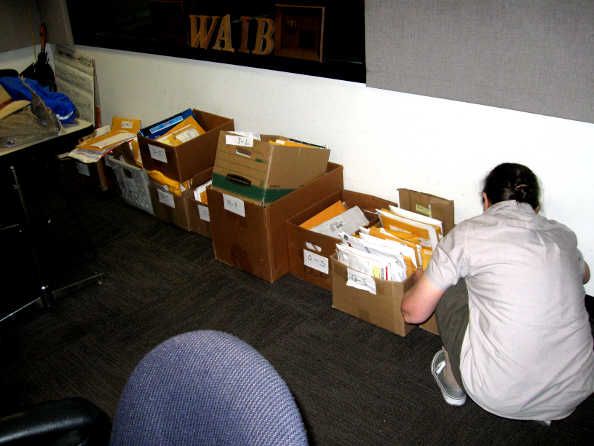 Pickles of the North Looking For Our Mail

We didn't get around to reading any mail on this program, but mail was something of a subject.

In the photograph you can see Pickles of the North looking through the boxes of mail that Management had dropped into Master Control a day or so before we went on the air.

I think that I was the one who provided the impetus for Management to suddenly deal with Staff mail.

The Development Director had mentioned in an E-mail that Staff should pick up our mail at the 388 Atlantic Ave. office, aka the Management bunker.

So I called her and asked if I could come in and pick up my mail on June 25, when I'd be able to come by late in the afternoon for it. She said all right, she'd gather up my mail and leave it for the General Manager to give to me.

When I got to 388 Atlantic Ave. that afternoon the General Manager gave me three pieces of mail.

I told him that this was odd, having gotten only three pieces of mail over the course of a year. We used to get at least two pieces of snail mail a week. He said he'd look around for more, but that I should write t the Development Director about it.

So I did. I sent an E-mail and asked the Development Director if maybe there was mail for “Back of the Book” or “Pickles of the North” around.

Well, coincident with my brining up the mail issue WBAI Management sent out an announcement that, “Mail is now located in boxes in the studio at CUNY. They are alphabetized by last name but check the boxes for the name of your show and any other producers on your show as well.
Mail will now be brought there weekly.”

So you can see Pickles of the North searching the mail in Master Control, what a place to put it. She found a couple of more pieces, addressed to me, and found a lot of mail that was not arranged by any alphabet we know. She also found a bill addressed to WBAI and Pacifica with a postmark from October of last year.

So now we have to wonder what the story is. Has some mail not been delivered to 388 Atlantic Ave? Did something happen to some of the mail? I was informed by someone that they'd sent me a snail mail in June. So now I'm wondering if that got to 388 at all, or if it's since been dropped into Master Control. We may need to reconsider giving out that 388 Atlantic Ave. address if Management can't handle the Staff mail.