It's Friday night, September 12, 2014, 23:24, and I've updated this page with the little bit about the chair in Master Control. Yeah, I said I was going to do it, and I've done it. More to come. The original top of this page follows the arrow. ⇒ We're having some real problems this morning, on the computer and off it. So this is a very lean Web page. I will beef it up at some point soon, if I'm able to. So check back in for updates.

The meeting started nearly an hour late, and I was the one who showed up and made the quorum. People had planned to argue over that hardly readable 46 page “melding” of every one of the “sustainability plans,” and their “notated,” bloviations again. I think it was good that we didn't even get to that.

Maybe because the meeting started so late, maybe because one faction operative has been shooting her mouth off saying things about people not coming to the May meeting, there was a lot more discussion about the “excused absences” portion of the meeting, where the LSB routinely excuses the absence of everyone who hasn't attended. And then we voted and not all of the faction operatives got excused this time. If you have three unexcused absences in a row you're off the LSB. I suspect that mostly the actions at this LSB meeting were just people venting. 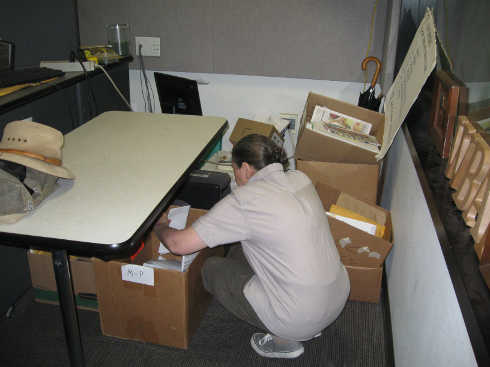 We plan on getting to the mail on this program. We have here a photograph of Pickles of the North looking through the mail that's been dumped in Master Control by Management. She didn't find anything new.

And now snail mail is going to be even more difficult to deal with. Here's an E-mail telling the producers about how such mail will be handled in the future. Yeah, the Management bunker is not too convenient for producers. Oh well. There is still E-mail, and these days there's even Twitter for those who don't have a whole lot to say. 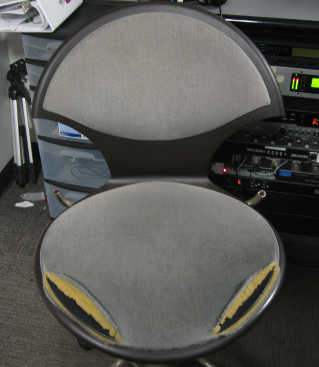 Here's the Master Control chair that the person running the board for whatever program is on the air sits in. The chair used to have arms. They were deteriorating, getting bent and broken and in worse condition week after week. You can see that the arms have now been cut off entirely. The seat is rather a joke too.

Jeez, is this a WBAI chair or is this a part of what CCNY is supplying us with? Either way wouldn't it be a nice accommodation to the people on the air to just get a new chair instead of cutting the defective parts off the current chair when they become intolerable?

Well, this is just one more slight from a Management that doesn't seem to respect the people who do the radio programs.

The following Web page has been updated since the last program: botb_20140816.html