It's Friday night, October 10, 2014, 22:25, and I've updated this Web page with more from Pickles of the North on the climate change March. We should get more updates in here pretty soon. The original top of this page follows the arrow. ⇒ Bring Back Uncle Sidney! That's what we say. And we'll talk about the below topics and try to get some mail in too. Cosmology and other stuff on this edition. Check back for updates.

The meeting started a mere half hour late. We were supposed to pass a motion regarding a Management Evaluation Committee and then hold elections to populate it. Well, all sorts of stuff was going on at the meeting.

The faction had some members show up for this meeting who usually don't show up. And we all got into voting during the “excused absences” portion of the meeting, where the LSB routinely excuses the absence of everyone who hasn't attended. At the last meeting we voted and not all of the faction operatives got excused. This time the faction had the majority for this part of the meeting and they excused all of their members, but they didn't excuse one of the non-faction members who wasn't there. If you have three unexcused absences in a row you're off the LSB. Maybe this stuff about excused absences isn't just people venting. Maybe this will become a bone of contention now. What a way to spend time.

After the LSB meeting there was a Delegates Assembly to consider a proposed amendment to the Pacifica bylaws. The amendment wold have allowed the PNB to try to amend the bylaws twice a year rather than the current once per year. I got to chair this meeting. What fun. The meeting did not pass the bylaws amendment. The meeting lasted an entire five minutes. Well, that's good, I think.

Our friend, fellow WBAI producer and Saddle Pal Uncle Sidney smith has been banned from WBAI by General Manager Berthold Reimers. The General Manager will not say why. He won't even tell Sidney why he's banned! This is grossly unfair to Sidney. Why did Berthold ban Sidney?

We plan to talk about a variety of things tonight, one of them will be a controversy on a science topic we've covered before. Has cosmic inflation been proven or not? Or is that wheel still in spin?

Pickles of the North was at the Climate Change March. Here's what she had to say about it. 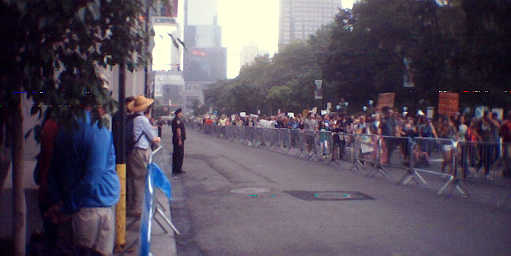 My dear pal Lulu of the Far South and I decided to go see what the Peoples' Climate March was all about. We joined in along Sixth Avenue in the fifties — to our surprise there were no french barriers at all lining the sidewalks there, probably because there were way more people marching than viewing the march. We walked for a little bit, then went back just off Columbus Circle to cheer folks on as they went by us. Right off Columbus Circle there was a double row of french barriers, which are those interlocking metal barricades that are now ubiquitous at almost every NYC public event. Ugh. The double row was set up so that emergency vehicles and control vehicles could move around quickly. At different points motorcycle cops whizzed by, and then an ambulance made its way through with lights flashing.

We really enjoyed the jumbled feel of the event. People from all walks of life, from all over the place, some marching, some dancing, mostly just walking with signs, and so many homemade signs! One of our favorites was a banner that had a little planet earth with arms and legs saying “I'm with stupid” and an arrow pointing to a little balding round guy with a dopey placid expression. That and “Friends don't let friends live in denial” and “Old Lesbians for Change!” Also many handmade signs sayings “Believe the Science” and words to that effect. It wasn't the biggest march ever, but it was a pretty huge gathering of folks, many of whom ordinarily couldn't stand to be in a room with each other, but uniting to say that global warming is real and we need to pay way more attention to how we live on our planet both for ourselves and future generations. Phew!

R. Paul had quite the time trying to retrieve the photographs of the march. I used what I affectionately call the “soda cracker camera” because it's a tiny little thing the size of a soda cracker. We couldn't get the photos out of the camera and onto the computer until right before the program. It's a cute camera but if the triple A cell dies, the photos go poof! And I hadn't used it for years. Oh, well, back to the more reliable large camera!