It's Monday morning, October 27, 2014, 03:52, and I've updated this Web page with the link to the current archive on WBAI.ORG. More to come. The original top of this page follows the arrow. ⇒ Oh, {{groan}} we're pitching again. Well, we hope that we can make money for the station, the station really needs it. We have a lot of unpaid bills. And we plan to not just pitch but to talk about the below topics and maybe some more if we can shoe horn them in. Check back for updates.

We had an LSB meeting this past Wednesday night. We got to the budget and actually passed it! We had some pretty poor rulings from the Chair. And then we had an executive session where the LSB, “... discussed a confidential personnel matter.”

I actually got to give a Treasurer's Report at this meeting! The Chair had mixed it up with the General Manager's Report, and I did an eight minute version of a report. Better than nothing, I suppose. As usual I put out a written Treasurer's Report for all to read.

WBAI is archiving the programs! Unfortunately, the regular archives appear to be down right now. They have been down for weeks. There is another archive, but I don't know how to get an archive blurb up there. Try this page and see if you can find the archive of this radio program. Or, if you don't want to root about through a great many listings on a rather unorganized Web page, just click this link to get the official archive, sans blurb.

Our friend, fellow WBAI producer and Saddle Pal Uncle Sidney Smith has been banned from WBAI by General Manager Berthold Reimers. The General Manager will not say why. He won't even tell Sidney why he's banned! This is grossly unfair to Sidney. Why did Berthold ban Sidney?

This is another pitching program. We raised $115 the last time we pitched. The interim Program Director will be looking to see what programs give evidence of having listeners. I hope we raise some money for the station this time.

So for this WBAI Fall 'thon, if you can, please call 1-212-209-2950 during the radio program and pledge some amount of money to help keep Back of the Book on WBAI and help keep WBAI on the air.

We plan to talk about the realities of the Ebola epidemic and the things that are being done about it and how some of them are really just manipulative. 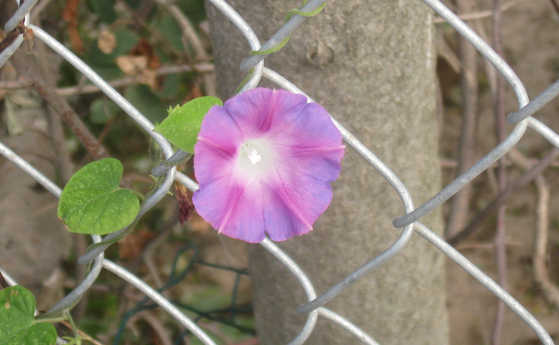 There Are Still Some Flowers Around

Even though we're in mid-Autumn now there are still some flowers around. We saw this one while we were wandering around Coney Island this past fortnight.

This flower has adapted to its environment and although we see a chain link fence separating things, the flower, the plan of which the flower is a part, is using that fence for support, to get its leaves in a better position to get the most of the dimmer, autumnal sunlight, and position its flower in a good position to attract insect pollinators.

Yeah, the conquering flower, this.