It's Friday night, December 19, 2014, 23:23, and I've added Pickles of the North's narrative about going to see the Thanksgiving Day Parade balloons inflated. The original top of this page follows the arrow. ⇒ It is a dark and stormy night. We are not going to be doing some stuff we'd planned to do tonight, but we will talk about some breaking news. I plan to update this Web page over the next fortnight, so check back in for those updates.

The LSB heard a report from the interim Program Director. The main thing I heard from his presentation was that he is leaving to go back to his real job in January. He also went over some of the things he's done and some things that he plans to do. Well, we'll see how this all goes.

We also got a report from the General Manager at this meeting. He was not pleased that I had reported what a person associated with the WBAI Community Advisory Board (CAB) had said that WBAI was leaving the CCNY studios after February. Well, it's too bad the General manager didn't attend the local Finance Committee meeting where this was reported, he could have given his side then. But when I asked the General Manager if his comments meant that WBAI would still be at CCNY on March 1, he waffled and then said that he couldn't say that. Uh huh, this is called a non-denial denial. And we had been told previously that CCNY has forgiven WBAI its back rent and wouldn't be charging us any more rent. That doesn't sound like an arrangement designed to endure for an indefinite period. It'd be good if we could know something for sure.

WBAI is archiving the programs! Unfortunately, WBAI appears to have permanently switched to a new archive Web page. I am currently trying to get an archive blurb up there, so far I have had mixed results. Try this page and see if you can find the archive of this radio program. Or, if you don't want to root about through a great many listings on a rather unorganized Web page, try clicking on this link to get to a page of links to the audio of whatever has been airing in this time slot for the past couple of months. There's no program description, but at least you can hear the program this way. Half of the programs on that page are Back of the Book programs, and since the General Manager has banned Sidney Smith from WBAI there's no telling what the other half of the programs on that page might be.

The odds are very high that we are going to have to postpone a segment regarding a World War I incident and its relation to some other things we had announced on the previous program. We hope we can do it on the next one.

We plan to talk about the Eric Garner, Akai Gurley, Tamir Rice and Michael Brown killings, and all of the stuff that's swirling around them.

We are really hoping to be able to get to some mail on this program. As it is, we're not sure though. We hope we can get some in. We have quite a backlog.

Dr. Stephen Hawking has said in an interview with the BBC this past week that the machines are going to take over and supersede humans! I think he's probably right. We hope to talk about this tonight. 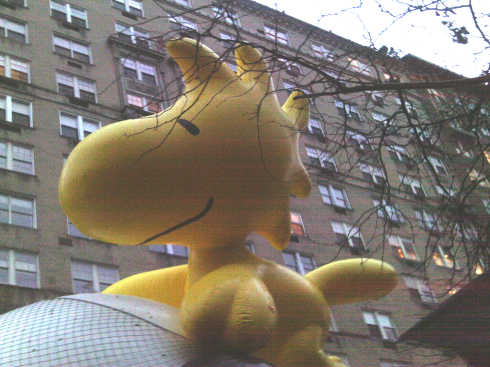 Pickles of the North went to the annual balloon inflation that goes on every year before the Macy's Thanksgiving Day Parade. This event happens on the grounds of the American Museum of Natural History. As Pickles relates below, she went with some friends, one of whom is 14 years old and has gone to this event every year of her life.

Here's a shot of the Woodstock and Snoopy Balloon. Pickles told us about this adventure on the air and here's her written account:

Pickles here. We have a tradition going back over 15 years of attending the inflating of the balloons for Macy's big Thanksgiving Day Parade. Back before it became a big thing it was lots of fun to stroll around the blocks surrounding the American Museum of Natural History, drinking street-cart cups of cocoa and admiring the big tanks of helium and the way the workers pumped up and then anchored the balloons. Various friends would meet and attend; even R. Paul ventured forth once but found the ever growing crowds too much of a pain in the ass to deal with, so once was enough for him!

Now it is a Big Deal and masses of people show up. I usually meet our pals Martin, Melissa and Iris and we have slogged through mild nights with people so tightly packed we could hardly move, or slipped along in freezing rain, or had our feet frozen during snow storms, and most lately endured a Nor'easter which did a lot to cut down on those masses, though one lady did manage to ram me with her stroller not once but twice, without anybody else around either of us. Sheesh!

Inclement weather is the best for the now officially named “balloon inflation.” You can linger as long as you like with nobody to jostle you. However, with wind gusts of up to 45 miles an hour, and a driving rain, it was so unpleasant that we all had to laugh. We ended up both soaked and frozen. But we had a really good view of all of our favorites on the road to being fully inflated - the old tyme elves, the little fat policeman and fireman, the giant Christmas ball, the house-sized twin pumpkins. Spiderman with his gargantuan butt rising majestically in the air. And dear Snoopy and Woodstock - so cute!

After lingering long enough to lose the feeling in our fingers, we entered the only bottleneck of the evening - the street corner designated as The Exit, which had been french barrier-ed into a tiny useless space. We were crammed unable to move for a few minutes, then bolted into the street and headed out to find a place to warm up and get some eats. Thanks to the terrible weather, we had a great time!