So we are going to head in through quite a cold night/morning today. And we hope to get to the below topics and more. We will of course talk about the assault on free speech by superstitious fanatics. You might want to look at the previous program's Web page, linked to below, for more on that terrible commute we had last time. It got worse. I will do my best to update this Web page over the next few days. 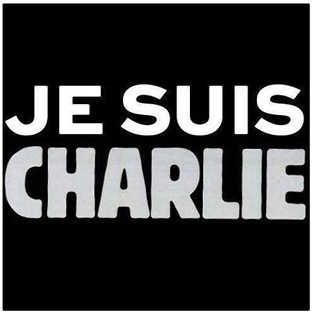 Of course we plan to talk about the massacre of writers and cartoonists at the French satirical publication Charlie Hebdo on this program.

It's official, NASA and the National Oceanic and Atmospheric Administration (NOAA) reported yesterday that 2014, was the hottest year on record since record keeping began in 1880. One atmospheric scientist said that it's likely that the Earth is warmer now than it has been in the past 5,000 years. Oh, this isn't good. We plan to talk about this tonight.

We got through a lot of the mail backlog on the last program, and it is our plan to try to get even more caught up on this one. Feel free to send us some E-mail if you'd like. If you say you don't want us to read it on the air, we won't. Otherwise you may hear your E-mail read on the program. 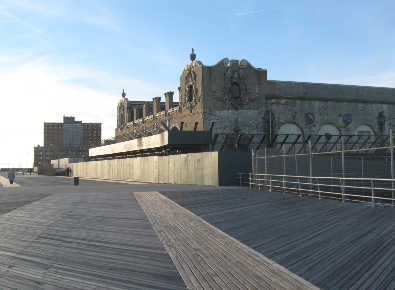 This past fortnight Pickles of the North and I went to Coney Island for the first time this year. It was a pretty cold outing that day.

Early in 2014, there was a lot of work being done on the roof of this building; that's when the scaffolding on the second floor as put up. They installed some extensive framing up on the roof then. When we went there this past fortnight they were taking the last of the structures they'd put up on the roof off!

There are plans to make this some sort of a performance space with an “amphitheater” as a part of it. They scraped away the community garden that was on the empty lot on the west side of the building last year. Since then that lot has been full of boulders and 10 foot high piles of dirt. Now they've put up that green painted fencing all around the building. So it looks like they're moving forward on the plans for the building again, but with some changes.

We saw workers removing debris from what had been installed earlier this year from that roof while we were there, and they had broken down part of a retaining wall around the roof in order to make it more convenient to lower loads of debris to the ground below. Sad to see them doing this to the old building.

The W. 22nd St. ramp to the Boardwalk is also fenced off. In fact the fencing goes all the way to W. 23rd St. Are they planning to destroy the little street named Highland View Ave. that's also right there?

We'll keep checking on this every time we go down there.

Our very own Uncle Sidney Smith, whose program Saturday Morning With the Radio On alternated with us for years before WBAI General Manager Berthold Reimers arbitrarily and unfairly banned him, has a blog these days. You can reach his blog here.