It's Friday night, April 24, 2015, 21:39, and I've updated this Web page with something about the move that didn't happen - yet. The original top of this page follows the arrow. ⇒ The below topics and more are on our agenda for tonight's program. We'll also talk about the most recent LSB agenda a little bit. Check back for updates.

This is a link to the latest version of the official WBAI archive To get to this program you'll have to click on the drop-down menu, which says “Display,” and find Back of the Book on that menu. We're pretty early in the list, so it shouldn't be too difficult. Once you find the program name click “GO” and you'll see a list of programs, most of which are Back of the Book programs. I will see if this can be made easier to get to, but they've just implemented this new page and I haven't had time to see what I can do with it. Good luck.

President Obama has signed an executive order barring discrimination on the basis of sexual orientation or gender identity by any contractors working for the government. The president has also called for an end to whats known as gay and transgender conversion therapies. We plan to talk about this. 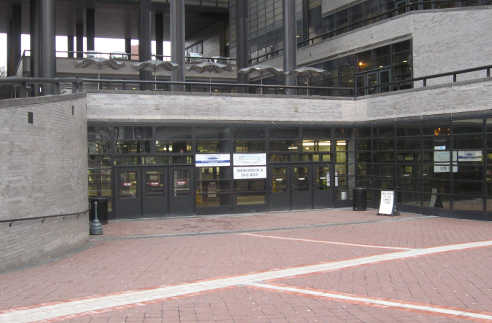 We had been told by the WBAI General Manager at the March 11, LSB meting that, “CCNY would strong, strongly like us to be out by March 31.”

In fact, you can listen to me asking the General Manager about the WBAI move and his answer here. DISCLAIMER: the industrial refrigerators kicked in just as I started the question so there's a lot of noise on this 23 second recording, additionally I had to boost the gain so that you can hear the General Manager over the noise.

So we wondered what was going to happen, and then nothing happened. WBAI did not move to the ersatz studios at 388 Atlantic Ave., where WBAI's offices have been located for a couple of years.

Essentially, unless Management has made a deal that they're not telling anyone about, WBAI is now squatting at CCNY. Not the best way to do things, in my opinion. 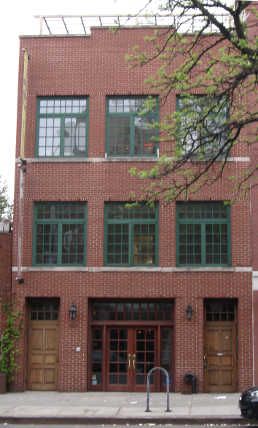 We Didn't Broadcast From Here

So for the duration of this odd situation where WBAI is supposed to have vacated the CCNY studio, but is still broadcasting from there, I suppose things will go along as they have for the past couple of years, since we went to CCNY from 120 Wall St.

We still have that enormous train trip and then that long walk up that steep hill to get to the studios to do a free form live radio program. It would actually be much easier for us, in terms of traveling in the wee hours of a Saturday morning, if the station's studios were located in downtown Brooklyn, but those studios may not be up to the broadcast standards of a station in the middle of the FM band in the #1 market in America.

The state of the building itself, outside of safety considerations, doesn't really matter, but Atlantic Ave. is busy, and that means noisy. The third floor shakes when an 18 wheeler goes by, and I've seen huge vehicles, escorted by the NYPD and safety vehicles, moving pre-fabricated construction materials, enormous steel skeletons upon which buildings will be based, through Atlantic Ave. right outside WBAI's offices at night.

Well, we'll all see what happens with this, I suppose.

Stan Freberg has died. We plan to have a little something to say about him. 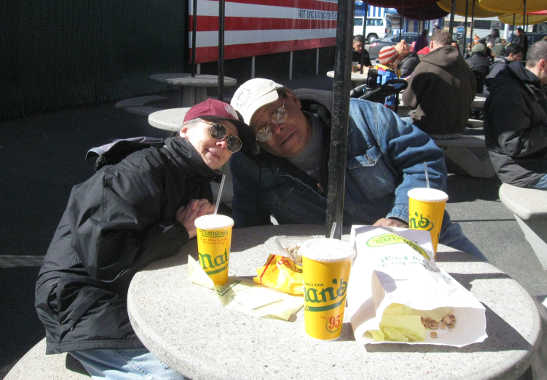 Pickles of the North and Uncle Sidney at Nathan's

Pickles of the North and I met Uncle Sidney down at coney Island this past fortnight. Here's a shot of them at “our” table in back of Nathan's.

This was the official Opening Day for Coney island for 2015, and some of the amusement park people had some sky pilot in there to bless the rides. We didn't bother with any of that, we just ate hot dogs and stuff and Pickles and Uncle Sidney rode around on the second version of the B&B Carousell (Yes, that's how they spell it).

Besides eating fattening stuff that at least two of the three of us probably shouldn't have been eating, we walked along the beach, looked around, hung out and generally just absorbed the Coney Island early spring vibes. As you can see in the photograph, we weren't the only ones.